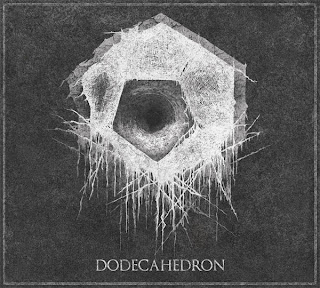 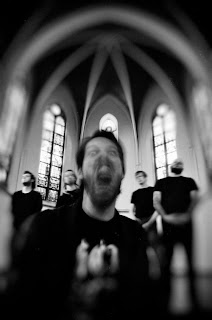 I have been meaning/wanting to cover this album for months now and even though it's kind of old now, I'm still gonna do it. I remembering seeing the cover of this album back in, like, January, and just thinking that no matter what genre this album was (because there was no description of it at the time, just the artwork) I would listen to it and review it. Now that I finally have it, cover still rules (in my opinion), I was going to cover it (even if it had been in September, I still would have covered this album).
I had read a couple of things before listening to this album about how it was basically a band trying to do what Deathspell Omega had done with their most recent album, they do black metal but make it sound really chaotic and off-the-wall. Personally, I don't have a problem with that, people accused The Axis of Perdition and even Blut Aus Nord of doing the same thing last year as well, and I liked those records a lot. I honestly don't have a big problem with a band recalling elements of other bands if it's a sound that I like or enjoy hearing, so I don't have a huge problem with this the fact that this album and band is treading lightly in their French brethren's footsteps. In addition to that, there are more than a few sections on here where the band are doing something all their own with that sort of sound. The dissonance isn't an original concept, but I like how even when they mellowed out, they could retain that same sort of high tension and claustrophobic atmosphere. It's that sort of tension that adds a sort of electricity to these songs and keeps them moving forward. There's also a more prevalent sense of melody in here than I remember hearing in Deathspell Omega's most recent albums. I mean, it's still pretty dissonant and electric, but on a track like I, Chronocrator, there's something that's driving the track more than sheer brute force and chaotic riffs.
I would like to take the time to talk about the atmosphere on here more though. Because of the more claustrophobic nature of the ambiance that surrounds the album, it can kind of make this a bit of a difficult record to listen to in a single sitting. Though the band do a good job at mixing things up and keeping things interesting, there really isn't any point where all that pressure and tension is ever released and it feels like it's just being contained, and like each and every track is just about ready to explode from keeping it restrained. While I think that it may have been a bad choice to have a five minute long ambient-ish interlude as the centerpiece on here, it keeps things rather tense before returning to more of the black metal and I do understand that it does break up the monotony that some might accuse the album of having if it hadn't had been there. At that point a lot of the more hostile nature exhibited on the first three tracks gives way to more melody and more industrial sounds are integrated into the background.
Those last three tracks, all part of the overarching View From Hverfell title, are probably the best place to start if you're not sure what the band sounds like. It's on these three tracks that the band really show their hand and demonstrate skill in melody, atmosphere, and tension and are at their best. The riffs are, in my opinion, a lot more memorable and stick out more so than the ones exhibited on the first half of the album. The band makes more of an effort to bring more range to these songs as there are ambient interludes, moments of clean guitar, near industrial-esque guitar sections, which branch off from the extremities that one might perceive the band to embrace to a fault. I think that if more people took the time to listen to the songs on this half of the album, or at the very least make an effort to seek them out, they might actually see what I see in here, a band with a lot of talent who are experimenting with different ideas. Now they just need to find a way to make them work more cohesively.
Personally, despite how much I anxiously awaited hearing this record, it took me longer to actually get into it and grasp what the band was trying to do more than I had expected. Nevertheless, I thoroughly enjoyed the record and despite the criticism I've seen leveled at it, I enjoyed it. I think there are some really interesting ideas used throughout both halves and I am looking forward to the next release from these guys. Let the chaos and hostility reign supreme!
Overall Score: 8.5
Highlights: Vanitas, View From Hverfell II: Inside Omnipotent Chaos
Posted by maskofgojira at 10:07 PM