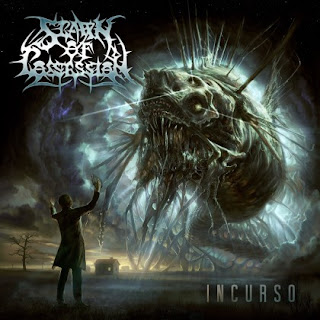 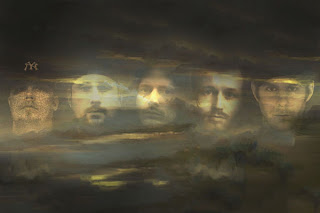 If there's been any band in the whole tech-death genre that is revered and held as either at the top or near the top of the genre, I think Spawn of Possession would claim that spot. The groups rather infrequent pattern of releasing albums has lead their first two albums to be held as sacred amongst those who are die-hards in the scene (or at least that's what I've come to assume based on what I've heard and read). So here comes their third album (with yet another pretty new line-up) six years after their last, is it another jewel in their crown?
I know that a lot of people hold Noctambulant up as a modern masterpiece and a genre classic (for which it may rightfully be) I can't say that I was ever one of those guys who preached that gospel. Now don't get me wrong, I've admired Spawn of Possession for their interesting take on tech-death, always crafting songs that stood out among their many peers as perhaps a bit less rampant with needless noodling or forgettable riffs, but besides that I can't say that they were a band that I put on whenever I felt like listening to tech-death. I don't have a problem with the genre as a whole, but after listening to a handful of bands and albums, it can become apparent rather quickly that the well of ideas is running dry. Even for SoP, I can understand taking six years to release a follow-up album, at the time their last one was released, tech-death had pretty much started picking up more steam that I remember it having before hand, and more and more bands started popping up with their own variation on the style, which wound up being just as derivative as the next. In those six years, there really haven't been a whole lot of bands that have stood out, to me at least, as presenting ideas that are unique or original sounding.
So, now that we have this album, I think that there were a lot of questions that people had before even hearing it, with the main one probably being, "Has the band redefined their sound and written a better album?" While that is solely a personal issue, I can say that I enjoyed this album more than either of their previous ones and I did find that the incorporation of more "classical" ideas in both background atmospheres and backdrops, as well as guitar playing, refreshing and a bit more interesting than the hundreds of other bands showing off how fast they can sweep-pick and gravity blast (no thanks to Origin). There's also a very clear jazz influence coming through in each of the instrumentalist's performances as well, though that should come as no surprise, and you need look no further than the bass playing which is both fluid enough to paint the background with some colorful low-end rumble as well as some brighter flares of high-end slapping and sweeping. I also thought that the band branching out and writing some longer songs also added to them as a more unique entity. Obviously the long song idea isn't anything new for the genre, but, personally, I'd prefer it if more bands figured out that they could fit more ideas into a song that's over five minutes and make them even more engaging than if they just crammed them all into three minute long blasts. We know you can play fast, we get it, it's ok to add a slow part that isn't a breakdown into your songs. Tracks like The Evangelist and Apparition sound more cohesive as pieces, and are actually more memorable, than I remember any of the material from either of their previous albums being and are two of the strongest pieces from this album.
I certainly enjoyed this record and like I said above, it's the first SoP record that's stuck with me for longer than the end of an album. I wasn't really sure what to expect from the album, I had hoped it'd be good, but I wasn't expecting it to be as good as it turned out to be. I know I've said it in the past, but I wish more bands would attempt to sound more like this album, it would do the genre a world of good. If you're a tech-death fan you're probably already familiar with this band, but if you haven't yet become acquainted, definitely check them out.
Overall Score: 8.5
Highlights: Bodiless Sleeper, The Evangelist, Apparition
Posted by maskofgojira at 11:55 PM