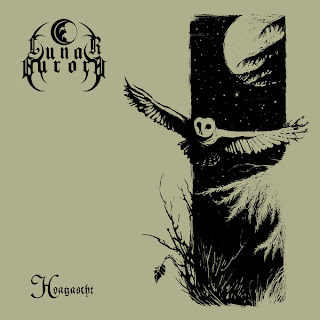 As much as I'd like to think of myself as being at least a little biased towards all releases in terms of release dates, I have to say that this album was one of my most anticipated releases for this year. Lunar Aurora ranks among my top three favorite German groups of all time (the others being Rammstein and Nocte Obducta by the way) and so I was anxious to hear this as soon as I heard about it. In the five years since their last album, they've returned to being a two-piece and have once again taken another turn stylistically. What awaits us die-hard fans inside...
Lunar Aurora has been one of those groups that have helped to define what atmospheric/ambient black metal is in my opinion. While their first couple of releases were more in line with the symphonic side of black metal, when they went ambient, they took it to new levels. Very few groups have retained a core sound throughout their evolution while still being able to reinvent their sound like these guys have. Each album presents a variation on their sound in a way that always makes it sound fresh and revitalized. Within the whole ambient and atmospheric black metal genres, I have to admit that for as much variation you can find among groups, the variation between albums from certain groups and projects can be a bit disappointing.
When I first put on this album, the first thing that I noticed was the different ambient parts, or rather, the way the ambient parts are presented on here in comparison to their past work. To me, what Lunar Aurora has done on this album is sort of their own version of what Sweden's own Lustre has been doing. The ambient bits have a bit more of a melodic edge to them that makes them pop out more than your average group from this genre and allows the ambient bits to hold a higher degree of impact on the listener. As you may have guessed, the atmosphere on here is certainly not just background noise and in many spots is actually very loud in the mix. I know that may turn some people off, but I actually found that the mix on here contributed to my enjoyment of the album, because of how the album was mixed and the ambiance was as loud as it is, it has a different vibe than the band's other work. The almost keyboard leads that are used throughout add a new flavor to the band's sound and isn't really something I remember hearing from them. The use of field recordings, weird samples, and the occasional added form of percussion also adds more color to the backdrop of these songs as well. For myself, there were times when the ambient sections took lead in a song and wound up being more memorable than the black metal parts. Speaking of the black metal parts of this album though, I think many fans will be glad for the faster material (don't expect any blast-beats though) on here after the band's exploration into more mid-tempo and slower songs on their last few releases.
Due to the different kind of mix and use of atmosphere on this album, I have to say that this is the most fun I've had listening to a Lunar Aurora album in a long time. In addition to that, like I said above about how there are some faster moments on here, those also bring a more upbeat nature to a couple tracks on here and just make them feel really melodic and infectious. I don't know if it's melodic enough to cross over into more mainstream black metal circles, but for a Lunar Aurora album, it was pretty memorable. This album also features a much cleaner production than the band have used in the past, which is yet another reason why this has the potential to cross over more, but may turn off some older fans who preferred the rougher and rawer production. The cleaner sound does lend itself to the band's constant progression, but improves the clarity more than anything else, allowing the many subtleties of the record to come through rather than be hidden in the background.
As always, I can only speak for myself, but I thought this was a great album and it didn't let me down at all. I'll admit that there are a couple of parts on here that are a little bit cheesy, mainly the samples, but the greater majority of this is really good. I can only hope that this record opens up some more doors for the duo and gives them the wider audience that they so rightfully deserve.
Overall Score: 9
Highlights: Im Gartn, Beagliachda, Reng
Posted by maskofgojira at 7:14 PM