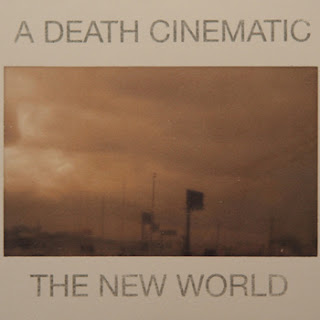 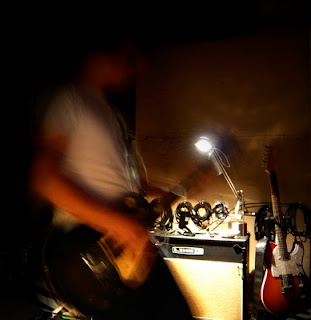 Last year I covered one of the releases from the prolific A Death Cinematic, and I covered it rather unfavorably. At the time I found that that album, Your Fate, Epic In Its Crushing Moments, in question was rather dull and boring and I didn't really get what all the hype surrounding the project was about. It wasn't until I had heard the splits that were released last year with Ekca Liena and Great Falls that I finally understood the project. I won't claim that I understand the intentions of every release, but I have begun to grasp it and enjoy it more than that first encounter.
The feedback that introduces the album is a very apt way to describe the chaos of the end of one world while the somber guitar passage that follows it is also able to personify the creation of "the new world." Unlike the rather flawed film of the same name by Terrence Malick, this album makes no attempts at trying to focus on the beauty of the world surrounding us, instead painting rather brutal portraits of this reality. It is this long and winding opener, When The Sun Settles Into The Horizon We Remember Our Rivers, that introduces us to the empty world that K. has imagined. The melancholic and mournful sunset over the dying world that this single track portrays, at least for myself, acts as the intense fire that slowly dies out as the album progresses. When I say that the fire dies down I mean for it to act as the roaring and powerful opener that draws you in before letting itself burn out, as the world this album paints does by its conclusion.
Unlike the two splits that turned me into a fan of the project, this new album takes a decidedly more Americana approach towards performance. It's not seeped in as much of the post-rock or drone that made up the older albums and EPs and helped bring the project to people's attention, but it also isn't in the vein of the doom metal that K. has experimented with as of recent either. The six songs on here maintain a very balanced and focused dynamic that relies more on a building tension within each track, more than a building atmosphere mind you that there is a difference, that steadily escalates before reaching its peak on the closing title-track. While I said above that the opener is indeed the most brutal/intense song on this album, that climax at the end of the album doesn't come in the form of total destruction and distortion as one might initially imagine; but instead ends on the most calming piece that K. has ever created. That title-track, accompanied by a good friend of mine, a Mr. Matt Finney, who provides a spoken word accompaniment to the bleak and empty landscape that the instrumental portion of the track creates. It is an absolutely haunting piece that is the perfect closer and is probably one of the finest endings to an album I've heard in quite a while. I'm still waiting for the collaboration that's supposed to be happening between these two, but for the time being, this works.
Fear not those of you who might take the "Americana" tag a bit too seriously, this is still very much as distorted album. Probably the biggest problem with this album is the use of some of the distortion, though that also helps to make up some of the most endearing parts of the project. I'm not sure how distorted some of the guitars on here are, but I really think that some of the feedback could have been taken out, as it can ruin the mood, as I felt it did during the otherwise stellar Our Sorrows Pile Up In The Night's Lament, but that's really meant to be a more general complaint. Like I said, that distortion and feedback help make the project as unique as it is, but I would have just preferred if some of these tracks were a little less harsh. Having said that, most of the time feedback is used on here, it does end up working to the benefit of the track.
Like I said in the introduction, I really didn't get A Death Cinematic on my first encounter with it, but this record really does leave an impression when you make the journey from start to finish. To return to the Malick reference once again, though I wouldn't say that it is K.'s Badlands or Tree of Life, it is most certainly his best work to date, call it his Days of Heaven. It's still a very, very good album, but I can foresee K. releasing his masterpiece one day soon, but until then, I can listen and enjoy what he's done thus far.
Overall Score: 8.5
Highlights: Sparrows Circle The Distance From The Gallows to The Sun, The New World
Posted by maskofgojira at 8:40 PM