Beneath The Massacre - Incongruous (2012) 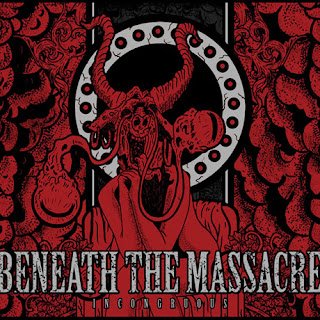 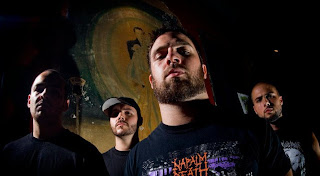 Back when I was bigger into death metal I remember finding Beneath The Massacre and just thinking that they were amazing. I don't think I can claim that I was a huge fan, but I have always enjoyed their take on tech-death, or deathcore as some have seen it. I've been following these guys since just after the release of their debut full-length album and have always found them to be an interesting band that seemed to break away from what I always thought of as "deathcore" right away.
As much as a lot of people may hate to admit it, Beneath The Massacre could actually be called a pre-djent group. While it is difficult to say that they ever contributed to that sub-genre, if you listen to their first EP, Evidence of Inequity, or their debut full-length, Mechanics of Dysfunction, there is a clear Meshuggah influence and all this happened before the big djent wave in the last couple of years. But for everyone who's listened to the releases that have followed those it's pretty obvious that the band have left most of their heavy Meshuggah influence behind them in order to focus solely on tech-death. The deathcore tag was also one that was put on them back when the band first started to come out and get popular as well and is another tag that has fallen away with their last EP, Marée Noire, or at least that was when I stopped hearing deathcore being used to describe these guys. So, with both tags that some might have attributed any success this band having coming from being part of a "trend" being removed in recent years, their evolution into a tech-death band has finally reached its logical point.
If you have a need for speed, I would definitely suggest at least looking into this album. There is no build-up whatsoever between pressing play and the opener Symptoms blasting into spiraling sweep-picking and blast-beats. There really isn't a whole lot of room made more melody or anything that might resemble the band bringing in a mid-tempo section, it's like the band is going full-throttle for pretty much the entire album. The only time when they slow down is when they do a breakdown, which is sort of a no-no usually, but it works on here because it's the only time that they let you breathe during a song. I can appreciate the use of a breakdown in songs like Hopes or Light because amidst the swirling technicality on here, they add a sense (even if it is small) of diversity to the album. The slowest track on here, the title-track, is also the shortest and an instrumental, which isn't a new idea for the band, but it's pretty much just a breakdown stretched out for about a minute and doesn't really go anywhere, but I wouldn't say it hurts the album since it is so short. Also, not a single song on here is over four minutes, most of them are under three minutes to be honest, so it's not a long album at all. It's kind of weird going back into the band's discography and seeing that their songs have become progressively shorter as they've progressed forward and this album features some of their shortest tracks to date.
Coming into this, I was actually unsure how I would like the album because of how short the songs are and how technical they are, I thought it would just go in one ear and out the other, but it's surprisingly memorable (to an extent). There were songs on here that I would actually say are among the band's best material yet, but it's not the type of release that will turn you into a fan of the band if you're not already. I would definitely say it's the band's most "catchy" material to date and is, in my opinion, their best, but it's still probably going to turn off a fair amount of people. Check it out if you're into intense tech-death, maybe even deathcore (to an extent) but that's not your thing, there are other bands out there.
Overall Score: 8
Highlights: Hopes, It, Damages
Posted by maskofgojira at 9:10 AM