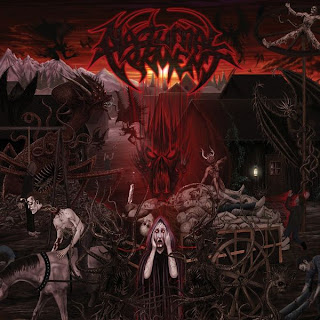 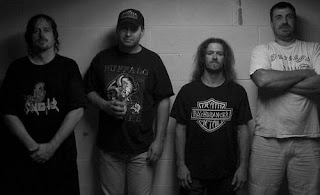 I have stated numerous times in the past that I long for the days when death metal was dirty, disgusting, and raw. Being well produced is fine, but it doesn't work for every group and a lot of them end up either sounding the same or very unconvincing because of how polished they sound. I much prefer the days when I could hear an album that was pretty much devoid of any and all polish at all and that was pure filth, give me a death metal album like that. Now, that's certainly not what I came in expecting from this album, but I thought I'd reference it here first before diving in.
This album, much to my surprise, feels like a total throwback to the early 90s of death metal, and I mean that in a good way. There were more than a couple of times where this made me think of Chris Barnes-era Cannibal Corpse or the first two records from Hypocrisy; or, if it helps you, the most blasphemous and foul records from death metal bands before emphasis got put on all low-end and speed. There reason why this reminded me so much of early death metal is because a lot of the riffs have an almost thrash-esque kind of feel to them which lends the songs to kind of flailing around in terms of tempo, call it technical if you will, but it sounds more like a result of conflicting grooves and high-speed riffing. There's also a solid dose of black metal thrown into the mix on here as well. The combination of all these different elements might give off the impression that this is a band that is rather undecided with what they really want to play, and in a sense, I could agree with that, but it's also one of the things that makes this record so endearing. In addition to that, who can turn down a cover like this one, it's brutal without being porno/goregrind levels of sickness, and that's a plus in my book by the way.
With all those elements being thrown together, I have to say that sometimes songs do feel a bit all of the place, especially early on, but there was never a moment on here that didn't lend itself towards being beneficial for a song. No matter how much a song may feel like it's just sort of jumping from idea to idea, none of those ideas are bad, I actually found most of them pretty good to be honest. I also think that for how all over the place some of these songs may be, it has to be said that most of them are all pounding and headbangable. There is also a good use of dynamics within these songs, and I know it's something I talk about a lot in these reviews, but when a band can include multiple shifts throughout an entire song fluidly, I think it's worth noting and complimenting because not every band can do that. Now, this might just be me, but I have to say that it's been a long while since I've heard vocals as hard-hitting and, at times, "scary" as these. I use the word "scary" lightly because it's one of the few times I've heard a death metal band who's vocalist could evoke a certain atmosphere and actually sound like he's going to kill you, hear Forever Eternal Darkness. It might just be me, but the vocals definitely one of the first things I got into on this record. This once again brings back the Chris Barnes-era Cannibal Corpse comparison because the vocals definitely bring a similar vibe to that of the early Barnes recordings, and they feel poignant. I mean this to be a compliment because Chris Barnes' vocals have really waned in the most recent recordings I've heard from him. But I'd actually say that there's more range demonstrated on here than by Chris Barnes, and sorry if this comparison seems a bit overused.
I'm glad that I gave this album a chance because it is definitely a solid release and one that has impressed me. It's not groundbreaking, but it's an album that is full of heavy and aggressive without losing sight of songwriting and dynamics. I definitely recommend this for anyone looking for some solid and interesting death metal. I'll sum this up by putting this record into three words: brutal, dynamic, and scary; now go check it out.
Overall Score: 8
Highlights: Cycle of Life, Bleeding, They Come At Night
Posted by maskofgojira at 6:02 PM