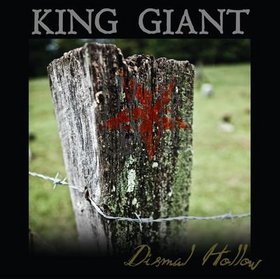 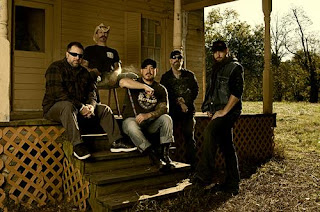 Before receiving this record, I had never heard of King Giant before but I immediately knew I would be in for something fun. I can't say that I'm a huge stoner rock/metal fan, but even I am unable to resist the allure of several bands out there. Plus at the time I got this, I really didn't have anything to cover from 2012, obviously, that has changed quite dramatically, but I still want to cover this band.
I'm not sure if I've mentioned it before, but I'm a huge fan of Clutch, and have been brought up on a bit of stoner rock in my youth, so I do enjoy stoner rock/metal when I, personally, feel like it's done well. When I first, and finally, listened to this record, it was everything I love to hear from the genre. It's got all the necessary elements that make it stand out among the many other groups that, in all honesty, are just derivative and quite boring. Probably one of the most striking things about this album on a first listen will be the vocals, as Dave Hammerly has more than a little bit of Glenn Danzig in him, and his performance gives the songs a bit more of an energetic feeling, which is a good thing when most of the songs on here top six minutes in length. When he's singing, he really brings a lot of spunk to table and gives the entire record a sort of bar-stage kind of vibe (that's meant to be a positive). Musically, it retains a lot of the blues sound that should categorize most stoner rock, but unfortunately doesn't. There's also a decent injection of psychedelia on here as well, which takes the form of the instrumental piece Road to Eleusis. I think it's actually a shame that more of these more trippy guitar passages couldn't have been used throughout more of the album because they definitely spiced up that song enough to make it stand out as just another track, despite being instrumental.
There wasn't a track on here that didn't get my head bobbing along with the grooves that these guys pump out, and that is ultimately where this band finds success. There are plenty, and have been plenty, of groups toying around with similar ideas as these guys, but maybe only a handful were actually good at writing songs that you could rock out to and remember. Whether it be a riff or vocal line, or even a guitar solo, I found that there was always something I could remember from these songs. I can't remember the last time a band with as much of a grasp on blues did that to me, aside from Clutch. I don't ask for a whole lot from stoner, sludge, or southern rock/metal albums, just give me a good riff or something to latch onto and I'm good. I'm surprised how many bands can't actually do that, and it is great to finally listen to an album that is just chock-full of em'. It's a shame that some of the songs are a little too long and some of the more psychedelic sections are sacrificed for more "typical" blues riffs. But with what they've done on here, I can't hold it against them too much because, once again, the songwriting is strong enough to make up for those little quips.
Though it did take a little bit of time for this album to actually grow on me, I did come to enjoy it quite a bit. It's the type of album you should really listen to loud, it's a party album, and while I'm not really a party guy, I did very much enjoy this. It's the type of album that actually makes me want to throw a party just to play this thing loud and rock out to it.
Overall Score: 8
Highlights: A Steward's Prayer, Pistols and Penance, The Fog
Posted by maskofgojira at 1:03 PM