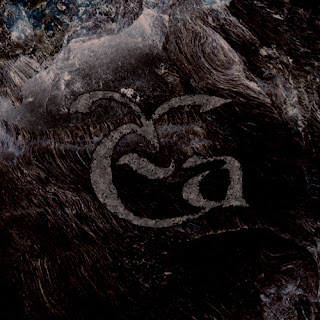 I don't think it's any stretch of the imagination that with the use of the internet, there's been a rise of some really, really bad bands emerging from the woodwork. Funeral doom is perhaps one of the worst genres to suffer from this because of countless one-man projects popping up performed by guys who think if they play super slow and use a little bit of feedback that they can be the next Mournful Congregation or Esoteric. Russia is, unfortunately, one of the areas in the world where this plague appears to be most prevalent (look it up).
In all honesty, after 2010's Au Ellai album, I had assumed that the project Ea was done. I had read that the project was brought together for three albums that were conceptually linked together, and I just figured that after those albums the band would be over, I'm happy to be proven wrong. Like I said above, funeral doom is a hard genre to find quality in, and Russia is a country that I've had quite a lot of bad experiences with musically, so the combination isn't one that would bring to mind a favorable group, but Ea is easily one of the most interesting funeral doom projects I've heard. Unlike a lot of their peers, the project has made use of elements that many other bands and projects seem to negligently forget. The use of melody, the use of variation, and the use of mood. Obviously, the genre of funeral doom isn't one that lends itself to happiness or uplifting moments, but it should, and the best bands do, be able to convey a sense of emotion through the music, and Ea does that in a way that many fail to do.
I'm not going to say that Ea is a project that is mind-blowing, there are a lot of elements in the band that fans of the genre will have heard before, but with this and their last album, the band has finally hit their stride and are nailing the funeral doom sound and bringing their own flavor to it. The first two Ea albums were fine, but they had their flaws, the debut wasn't really anything too special for the genre, and their follow-up was a bit too synthetic for my own taste; but like I said, they hit the mark on their last album, which had all the necessary elements for the band to start crafting an even more honed sound with future releases. On here, they manage to hit the bull's eye and craft an album that all funeral doom fans should definitely take note of. Despite being only one song, which just happens to top forty-seven minutes, the band bring together all the sounds they perfected on their last album and unify them.
The band has never been all that reliant on vocals, and on here they play but a minor role in the overall tone of the album, but they are able to bring a bit more life into some of the more dirging moments of the song. Aside from that, musically, you'll find that on here, the balance between the more melodic funeral doom the band makes use of and their interest in most post-rock and classical influenced ambiances is at their peak. The synthes are nowhere near as fake sounding as they used to be and they create a haunting and sorrowful backdrop to the slow, plodding guitars. It's also worth nothing that the synthes are not simply for the background as they make more than one appearance as a leading instrument, and it works fantastically. In my opinion, there's a good balance between the use of guitars and keyboards on here as well. The guitars aren't super heavy or crushing, which may be a letdown to some, but have more of an "epic" sense to them where they are used just as much as the synthes are in some cases to provide more background heaviness, while the lead guitar provides the melodies on top. Hell, there's even a solid guitar solo in here as well.
I think it's pretty clear that I really enjoyed this album, and despite a couple of small gripes, it's certainly the best funeral doom record I've heard this year, and I somehow doubt it'll be easy to top. I can only hope fans of doom metal, in general, take the chance to listen to this album and experience this piece of masterwork. I can only hope that the band can continue this ascent upwards in terms of quality with future releases, cause their future looks very bright if I judge it by this album.
Overall Score: 9
Highlights: Ea
Posted by maskofgojira at 10:58 PM