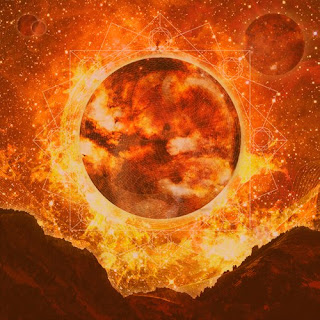 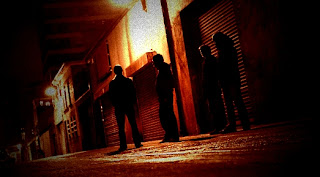 Recently, as in the last few weeks, I just received an email by this band called Refraction who asked me to cover their album. Being a cynical and skeptical person by nature, I checked out the link they sent me to their bandcamp page and initially thought it was a djent project. The cover definitely made me think of that, listening to the music though, that is not what it is.
Although my impression from the cover was wrong, I do have to say that the style of music that Refraction have chosen to play is still rather stagnant in terms of quality. Post-metal is not exactly a genre that has changed too much since groups like Isis and Neurosis popularized it and brought it into the mainstream consciousness back in the 2000s, but while listening to this four song EP I have to say that I was never bored. In fact, I was actually quite captivated with these tracks. Sure, if you've heard a handful of post-metal, instrumental or otherwise, you could pretty much guess how this band is going to play and write songs, but there's something just a little bit different about this band, at least on these four tracks anyway, that does separate them from their many peers. For one, none of the songs on here are particularly long, the longest is just at six minutes, or is a second or so off, which definitely does change the effect this release can have on the listener. I never felt all that hypnotized by these songs because of their length they don't have as much time to really just draw you in and lock into a groove, but they are certainly a lot more fun than a lot of other bands in this style. But the aspect that really got me was how up-beat this album sounded. It never felt all morose or dour, but felt a bit more up I guess. I felt as though I was in a good mood whenever I listened to this album, and when it finished, I stayed in a good mood. Maybe it's just me, but I hope not.
Overall I have to say that I was certainly won over by this EP. Despite the first impression being completely wrong and the band playing a style that is quite hard to make interesting anymore, they pull it off quite well. Definitely an album you might want to check out if you're a fan of post-metal, or even alternative music for that matter.
Overall Score: 7
Highlights: (C)ytosine, (G)uanine
Posted by maskofgojira at 12:15 PM