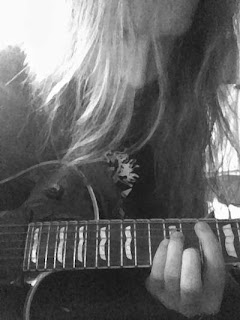 I can recall first hearing Galaktik Cancer Squad. I just remember stumbling across some random user's page on Last.fm (great site even if there are a lot of trolls and they won't let me post links there anymore) and finding a link to an album by a project called Galaktik Cancer Squad. I downloaded that link and since then, the project has released three full-lengths (including this one).
In the past, specifically when I heard that first album, I have had a bit of a problem getting into GCS. While I'm all for instrumentals and progressive playing and whatnot, instrumental progressive black metal of this nature just felt a bit aimless on it's own. It was not until Argwohn began adding vocals into his songs that I really began to take an interest in his work with this project. Sure, the playing was always good, but I guess it just went over my head and just never came across as well put together as it should have. With this album, I think he's really come into his own as a songwriter though. Yes, he still provides us as listeners with plenty of blasting and traditional tremolo picking, but as with his other material, he throws in even more technical and progressive riffing than many of his peers do. At times channeling the spirits of groups like Necrophagist or Martyr into his style of playing. The riffing at the beginning of Hypnose is definitely bringing to mind those artists and should certainly bring in some fans of those bands even if they might not exactly be the biggest black metal fans.
The biggest success this album achieves is simply in memorability. Obviously this is a subjective thing, but I found several guitar riffs getting stuck in my head, the chorus riff in When The Void Whispers My Name for one is just a great progressive lick that is just quick and efficient at worming it's way into your head and then burying inside. Now, that's not to say the entire album is just catchy riff after catchy riff, it has to be said that there is at least one spot in each of the five tracks on here that I find to be memorable and/or catchy in some way, but along with that, since these are longer songs anyway, there is some filler. While some tracks manage to come out on in the end just fine, other tracks don't fare so well. In my opinion, the first seven or eight minutes of In Lichrwelosen Weiten is pretty uninteresting stuff, and then once you hit the piano section near the end it all just picks up. I don't think it's so much that there's filler material on here (there's only five songs) as much as that there are certain parts in songs that are filler. While the tremolo picking sections are certainly well done and definitely help maintain this as a black metal project, I think that it is ok to make tracks without them, or at least as much of them.
So yeah, in the end I was certainly impressed with this album. I was sort of excited to hear another album from Argwohn with vocals on it and I don't think it's a stretch to say that this is the best album he's released under this project so far. It still has some problems with filler material but aside from that, he's getting better at his craft. Definitely something you might want to check out if you're a fan of technical or progressive forms of black and death metal.
Overall Score: 8
Highlights: When The Void Whispers My Name, Ghost Light
Posted by maskofgojira at 11:14 AM