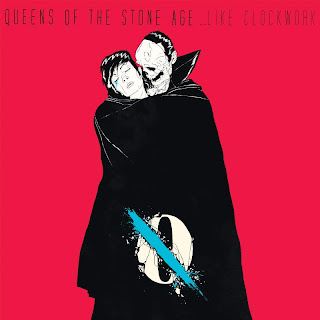 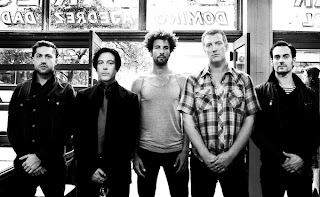 For as many really, really bad pop rock and alt. rock bands that are out there now being played on the radio, there is the occasional gem. Though it took me quite a while to really see the beauty, QoTSA is definitely one of those gems. A band that is always doing what they want and has never really conformed to the whole mainstream environment despite always being in the limelight to some degree, that is how I view QoTSA.
I guess one of the reasons why I love what QoTSA do is because despite them being known as a hard rock band who can play to hundreds of people, they are actually incredibly diverse. Listen to any of their albums and you will get a variety of different sonic ideas from straight-up rockers to somber ballads to sexy dance tracks to psychedelic desert rock and the occasional metallic track popping up, and just like their previous records, this album keeps in that vein. The first three tracks on this album should give you an idea what the rest of the album will bring to the table. Opener Keep Your Eyes Peeled is this odd psychedelic doom metal-ish track that just sort of plods along and is one of the heaviest things I've heard from the band despite being quite minimal in it's actual structure. That is then immediately followed by I Sat By The Ocean which is a nice up-tempo rocker that I could perfectly imagine the band playing on a beach somewhere in front of hundreds of kids on summer vacation. It has that poppy sort of sound that the band manage to infuse into their songs despite the main riff sounding like it came from an old blues tune. Then there's The Vampyre of Time and Memory which is one of those somber ballads I mentioned above. That's the first three tracks, the rest of the album keeps up with some nice diverse songs.
As much credit as I give the band for being diverse, I have to say that none of their albums, I feel, have been great from start to finish. There is usually a few tracks that are just sort of bland and don't do anything for me and unfortunately this album isn't any different in that regard. Now, it's obvious that there are some clear highlights, whether it's the doom-laden groove of the aforementioned opener, the shifting tones of desert rock-meets-dance rock of If I Had A Tail, and then the huge hard rock devil that is the album's first single My God Is The Sun. These are tracks that are big and the band know how to make their more poppy sensibilities work within their rougher exterior. They're fun songs with big choruses that just make you want to sing the choruses along with Josh Homme. On the lesser side of the spectrum are tracks like the three that close out the album. Now, I have certainly heard bad songs before, and these are far from those, but they just don't do much for me. There's some nice grooves and solos and piano playing, but it's nothing I haven't heard the band do better before.
Probably the biggest surprise to me was on tracks like Kalopsia, and to a lesser extent Fairweather Friends, where Homme's vocal delivery began to sound increasingly like Trent Reznor. Maybe it's just me, but I just thought that was sort of weird. It was like hearing Reznor sing on top of straight-up rock songs (which might be interesting). And this is coming from someone who has always admired Homme's rather diverse vocal style. Not bad, just an interesting trait I heard in the vocals that I didn't expect.
So, overall I think it's a solid enough record, but not without it's flaws. The first half of the album contains some of the best songwriting I've heard all year and definitely contains some of the catchiest songs as well. I know this review might be a bit more negative than some of the other ones out there, but maybe this is more like your opinion. Let me know what you think - as always.
Overall Score: 8
Highlights: Keep Your Eyes Peeled, If I Had A Tail, My God Is The Sun
Posted by maskofgojira at 11:40 AM