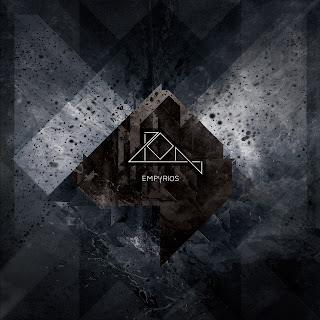 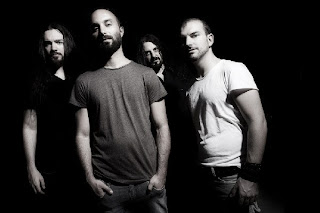 I remember back in the sophomore year-ish of my high school career, one day my dad happened to be playing this one record that caught my ear one day when he was driving me to school. That record turned out to be Empyrios' 2008 record, The Glorious Sickness. At the time it shocked me because, now looking back, it was a record that definitely predated the rise of a genre called djent.
So, with that statement above, one should be able to get a nice and clear image of what this record sounds like, more or less. This is a groove based prog-metal record. Now, the reason I don't necessarily view this record as "djent" so much as many others is simply because of a few very minor factors which first, and probably most importantly, are the vocals. While there are a couple of growls on here, the majority of vocals performed on here are cleaner - and more importantly they fall somewhere between power metal and thrash metal sort of singing. That doesn't mean high-pitched and annoying so much as aggressive, but very clean, and very clearly showcase an accent in the guy's voice. It's not for everyone and frankly, not every song on here features a great vocal performance from him, but it is a distinction. Next is the more industrial tone that a couple of these songs have. Again, not a big difference from other djent based groups, but they aren't quite as over the top you could say as many younger groups. Now, this is obviously only my opinion, so feel free to tell me I'm full of crap if you feel the need to do so.
To be completely honest, even when I initially heard this group I wasn't quite sure why I liked them, and to this day I'm still not sure. Musically, there are bands who do this sort of sound better, there are better vocalists out there, and there are bands who write more interesting and catchy songs than these guys do - yet I still take time to listen to this album and dig what they are doing. There's just this sort of quality about this band that somehow appeals to me and keeps me listening. But enough of me rambling, and back to the album at hand. This album does probably the worst thing a band could do when releasing a new album and open the album with a pair of pretty weak tracks. In my opinion, Nescience and Domino are two of the weakest songs on the entire album and they both open up the album. Obviously this is just my opinion, but doing that can prove to be a failure of an album to many people who will judge an entire disc based off of those initial tracks - so if you can get past those first two songs than you'll actually get some rather badass, groovy progressive metal. I'd say the shift into some great material is rather immediate. Pretty much as soon as Masters opens up, you're going to hear some of the best material the band has written to date (despite the rather ill-judged dubstep conclusion of this aforementioned song). These songs aren't going to change the game of prog-metal or djent or whatever, but I do feel like they are catchy little numbers that have stuck with me since I heard them.
For me, the clear highlight has to be the album's centerpiece Renovation, which isn't all that different from the other tracks so much as everything just works. Instrumentally, you get some solid grooves, but both the synths and vocals take a more atmospheric approach that definitely shows during the chorus in particular. This chorus just soars and is easily the catchiest song on the entire album. The middle section also brought to mind a bit of Deftones as well. On a side-note, maybe it's just me, but does anyone else hear Gillaume Bideau (of Mnemic) providing some guest vocals on Square One - I could swear he's growling and singing on it?
Overall, I was pretty impressed with this album and found myself replaying it several times. There are a couple of weak spots here and there, but the songs are strong and catchy to overcome that for the most part. If you're not a fan of more groove based metal, chances are you aren't going to dig this, but it's a nice meeting point between power metal (for one reason or another I see more fans of power metal embracing this than other groups - go figure) and modern metal.
Overall Score: 8
Highlights: Reverie, Unplugged, Renovation
Posted by maskofgojira at 8:13 PM