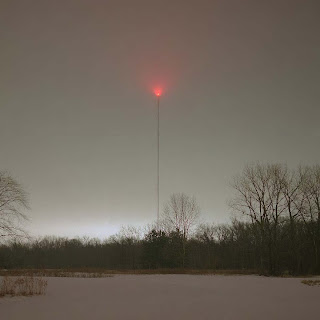 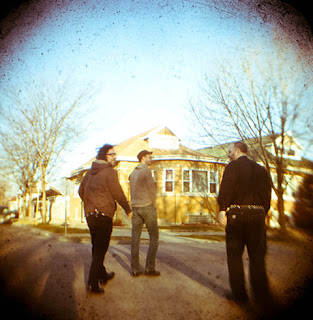 Kwaidan is a band who I first covered last year in a rather short little review dedicated to the work of André Foisy. Since it was a live recording, it was sort of difficult to really get a vibe for what the trio was really going for at the time and I said that I would love to hear what they would do in a studio setting. Well, the time has come to finally tell you about what that band did in a studio.
While the debut live recording was dark and very ambient based, this album really expands that into something far more engaging. I know it can be rather hard to understand whenever I say that an ambient based record can be engaging because, if it's ambient and devoid of melody or rhythm, how can a listener really engage with it. Sure they can be absorbed with it and become hypnotized or entranced with it, but you can't really say that you are vibing off the record like you would a pop or rock based record. In many cases I say that ambient records can engage you, and while those record usually don't contain any sort of percussion instruments, it is possible to really interact with them, and this record is a prime example of an ambient based recording being fully engaging. Because of Foisy's tenure in Locrian, he obviously knows how to create drone based music that pushes boundaries and that can actually grab people who many otherwise not listen to drone based music - and even though I would primarily call this record ambient, it is certainly droning as well (God, I feel like I'm running around in circles here, so I'll stop rambling like this!).
The six tracks that make up this album is easily some of the best ambient-drone I've heard in a long time. The opening trio of tracks, which make up the Three Empty Rooms of Light and Space trilogy, really progress and flow into one another which I think is a great way to open up the album. While the opener and first part of the trilogy, Evening Bell is truly a spacious and low-key track, Gateless Gate picks things up with some interesting percussion playing and some really spacious guitar lines before settling back down on Ostension. In a way I'm inclined to mention post-rock because of the way the tracks manage to ascend and descend with such clarity and subtlety; and there were a couple of guitar lines that did bring to mind the build-ups that are found so often in post-rock groups. But this trio of tracks is far more pensive and reflective than any post-rock group I've ever heard. Even when things get louder, like when the drums begin to actually play rhythms, it's hard to say it ever moves past the realms of meditative calmness.
The last three tracks take things into a slightly more "accessible" direction, at least from my point of view. If such a thing could exist as an ambient ballad, it would be The Iceberg and Its Shadow on this record. I'd call it a ballad simply because of the more melancholic atmosphere that is used throughout the track. It's incredibly somber, even for the album, with piercing piano keys, spacey atmospherics, and some rather off-putting low-end drones dominating the three minutes it's available to be heard. The final two tracks are, in my opinion, two of the best tracks I've heard all year. The bleakness of Space As Support and the more uplifting (in a sense) of closer The Sound of This Bell really just encapsulate everything I want to hear from a record. That's not to discredit the rest of the album (or even any other album I've heard this year for that matter) but these two tracks give me exactly what I crave from music at this point in time. These two tracks manage to take me to the pits of despair and then bring me back up again within the course of about nineteen minutes, and by god if I don't want to just replay those two tracks over and over again!
So yeah, you should get by now that I thought this album was just amazing. It manages to cover a pretty wide spectrum of emotions and tones throughout it's six tracks and bring me to a place that I have not been taken to by another record, ever. It's great, and even though I wish that everyone would go out and listen to this album as soon as possible, I know that this sort of stuff is not for everyone. Fans of experimental music should definitely seek this one out though, one of the year's best.
Overall Score: 9.5
Highlights: Every Track Is A Highlight
Posted by maskofgojira at 11:29 AM