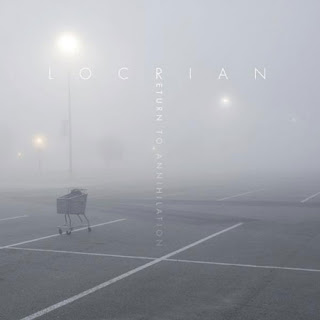 It actually strikes me as odd how in the course of only a couple of years, the trio known as Locrian have become one of my favorite musical acts working today. In addition to that, it appears as though with every full-length they release, their popularity just grows (which is always a good thing). But even I was surprised when I heard that they were signed by Relapse Records.
When I heard The Crystal World back in 2010 I was not all that familiar with the worlds of noise or drone based music that also had elements coming from extreme music and so I wasn't quite sure what it was that I was hearing at the time. By the time The Clearing was released back in 2011, Locrian had developed quite nicely and in my mind their sound had evolved into something much less definable to a genre, and my ears had become far more accustomed to their sound at that point as well. Then there were the two collaborative albums they put out last year with self-titled Locrian & Christoph Heemann and the collaboration with Mamiffer, Bless Them Who Curse You. It was obvious the band was pushing their sound even further on both those albums, which could be seen on the collaborative EP they did with Horseback back in 2011 as well. Whether it happened to be the more ambient based sound of their work with Heemann, the more meditative work with Mamiffer, or the pushing of their blackened noise sound with Horseback, the trio was moving into a realm of even further genre unclassification (not a word but I'm sticking with it). When I heard the band was going to be embracing influences coming from 70s progressive rock on this album I was very interested to hear what they would do with it.
It doesn't really surprise me in the least that the first time I heard opener and lead single(?) Eternal Return I was thrown for a bit of a loop by it's short length and relatively upbeat nature. In comparison with the work of their last four full-lengths the track was relatively speaking closer to synth-pop/synth-rock than the blackened drone they had come to be so closely associated with. The rest of the album fortunately, or unfortunately - depending on how much you dug that track, digs further into that progressive rock and krautrock sound. While I'm certain that the band has embraced ideas from the likes of Genesis and King Crimson, this record came off as much more of a krautrock sound - though that's more likely due to the band's adaptation of the ideas more than an actual taking on of one style over another. For me groups like Can, Popol Vuh (who the band has covered before), Ash Ra Tempel, and Amon Düül II all over this record. The hypnotic drum patterns, the spacious guitar work, and the huge synth tones and drones just brought back the sounds of those groups, among others, but not in a bad way. Much like the band's cover of the Popol Vuh song Dort Ist Der Weg, on their single for Flingco Sound System back in 2011, the band certainly take on the sounds of those bands, but they are certainly not copying them.
Even though these songs are definitely more palatable than much of what is held in the group's back catalog, that does not mean it's easiest to absorb. The repetitive rhythms and chanted vocals are certainly less abstract but they lull you into a state where a song can just breeze by you and you don't even realize what you just heard. I found myself having to revisit tracks like A Visitation From The Wrath of Heaven and Panorama of Mirrors many times before I even got a handle on what the band was doing. The grooves would just lure me in and hook me and before I knew it the track was finished and I would be left wondering how eight minutes (in the case of the former track) had just past me by. That's not to say there aren't tracks that are gateways into the album. I found tracks like the aforementioned Eternal Return and even the the boisterous title-track to be the places I went to after the first listen through because they were much more immediately grabbing and, in a way, poppy. But obviously, with many more listens, those songs that are tougher to crack do become more revealing each time I listened to them.
So, the question remains, have Locrian topped themselves yet again? The answer, at least to me, is most definitely yes; and in my opinion that was no easy task seeing how much I loved their last handful of releases. Despite being signed to a bigger label than I think many ever imagined the band would be on (I'll admit to being one of those people) the band have not softened their sound but actually made it even more expansive. Definitely a must for this year and certainly among the best albums you'll hear all year.
Overall Score: 9.5
Highlights: Every Track Is A Highlight
Posted by maskofgojira at 8:22 AM