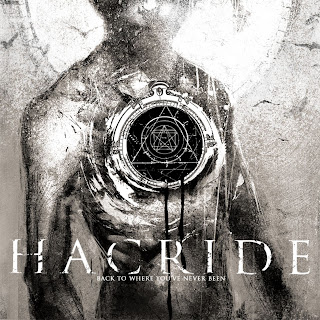 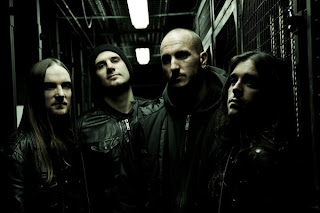 For as much as I love the French metal scene (whether it be the black or progressive styles) there are always some bands who I just have problems with. I found out about Hacride, originally, back when they were mentioned in an interview with Gojira, and have been trying to get into them ever since. They're just a band I have had trouble getting into in the past so I had hoped that this new album might finally provide me with a way in.
I don't know why I've always had such trouble getting into this band. Their take on the whole progressive groove metal sound was one that I think Gojira had mastered and thought these guys did well but nothing ever seemed to stick. I respected the hell out of the band's last record, 2009's Lazarus cause I thought it had some really cool ideas and songs on it. But since the release of that album, the band has replaced half the band - bringing in a new vocalist and drummer. With that shift comes a bit of a departure sonically for the band. It's not a big shift, but it's one that definitely caught my attention. I know that it's been the biggest topic of debate when talking about this album, but the biggest difference is definitely the vocals. While the band's previous vocalist was pretty consistent with a harsher delivery for the most part and cleaner vocals being used sparingly, clean vocals have definitely come up since the last album. Now, that's not a bad thing in my book, but this new guy's clean voice definitely reminded me of the sound of the first singer of the band Drowning Pool (yes, I listened to them back in grade school). I never meant it in a bad way (frankly, if I'm going to listen to Drowning Pool, I'd have their first record over any of the other crap they've put out since). You can decide whether or not you find that as a plus or a minus when it comes to the album, but it definitely threw me off at first.
Musically, the band hasn't changed too much, though this album is definitely more straightforward and driving than their last two have been. Songs are shorter and more direct rather than the longer and winding tone that was taken on their last album and the more experimental one on 2007's Amoeba. At times it does hint towards a bit more of a hardcore sound than previously known, as well as an occasional nu metal one from the vocals. Granted, there are just small things that can be heard every now and then throughout the album, as a whole, the band still remain true to their more groove metal sound. I don't have much of a problem with the route they've taken, it works, though I have to say that neither the more direct nature of the music or the more varied vocals did anything to increase my enjoyment of this album. I do have to say that the bass tone on this album was well done and there's some really well done guitar work done on Ghosts of The Modern World. I actually wish more features from that track had actually appeared on the rest of the album because there was some really cool progressive riffs on that track that make it the clear standout on this album. Album closer Requiem For A Lullaby also has a bit of a Deftones kind of a vibe at times as well - another feature I kind of wish there was more of on here.
Frankly, I wish I would have enjoyed this album more than I did because I know Hacride is a good band, but this album just did nothing for me. Like I said in the beginning, I just have trouble getting into this group for some reason, and unfortunately this album did not heal that problem. If you're a fan of more progressive forms of groove metal (not djent) than give this one a go.
Overall Score: 7
Highlights: Introversion, Edification of The Fall, Ghosts of The Modern World
Posted by maskofgojira at 4:43 PM