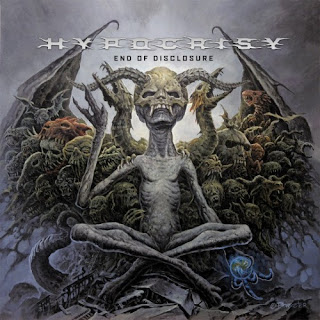 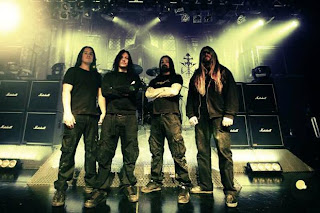 I've been a long time fan and supporter of Hypocrisy. In my opinion, they are one of the long standing melodic death metal bands to not actually sell out in favor of a more commercial direction. While I can't say each of their albums is fantastic, they're a band who I hold in high regard.
With this new album I can't really say I was expecting too much going into it seeing as I actually wasn't aware that the band were recording/releasing this until I saw it. I mean, for all the commercial accessibility that Peter Tägtgren has had with Pain, I have enjoyed his retreat into more traditional death metal and melo-death with recent Hypocrisy albums. While he can get out all his commercial and pop ideas out in that project, with this he can indulge in more aggressive tracks that deliver the goods. So, in that regard, this album isn't so dissimilar to that of the last couple of albums the band has released because it is a straight-up, no bullshit, modern, melodic death metal album. You're not going to get soaring clean vocal choruses, synth heavy melodies, or super polished production; but having said that, it's not a retro sounding album either. It rides that balance between being modern while playing a the style in a way that if the production was a bit more raw or messy, it could have been released in the 90s.
In my mind, this album is a lot closer to an album like 2004's The Arrival than either 2005's Virus or 2009's A Taste of Extreme Divinity. The sound on here doesn't tread into straight-up death metal, or even brutal death metal, as those two albums did and instead finds solace in a sound that is driven by guitar melodies over almost anything else while adding in a somewhat more epic sounding backdrop using synth tones, which is something that really made The Arrival sound the way it did. But I wouldn't call this a retreading of the band's sound by any means. I would actually say this album is less atmospheric than that album was while having a guitar tone is a bit more chunky. It's obviously not a huge departure, but it's enough to keep each album a bit different. Frankly, in terms of the songwriting on here, I was actually surprised by how consistent the band were. I honestly haven't been this impressed with a Hypocrisy album since I first heard 1997's The Final Chapter. Now, what that means is that each song actually manages to be quite well written and quite catchy, and for all the respect I give the band, their albums have not been this consistent in a long while. Whether it happens to be the epicness of the opening title-track, the more direct approach of 44 Double Zero, or the highly atmospheric nature on closer, The Return, pretty much every track on here is a fierce punch to the gut without relent.
This album did surprise me seeing as I didn't expect all that much coming in. It's another worthy addition to the band's catalog of solid albums. Honestly, if you haven't been impressed with the band up to this point, then this album won't change your mind, but if you've been on the lookout for a solid piece of melo-death, this should be pretty high on your pick-up list.
Overall Score: 8
Highlights: Tales of Thy Spineless, When Death Calls, The Return
Posted by maskofgojira at 8:52 AM