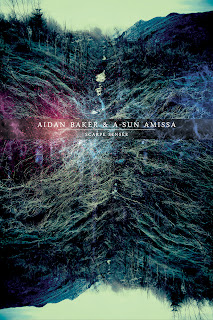 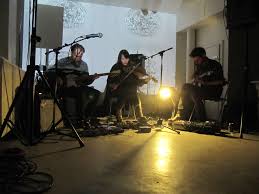 Obviously anyone who knows about the drone metal genre beyond Sunn 0))) will have heard of Aidan Baker, or at least his band Nadja. Apart from that gig, Aidan does a lot, A LOT, of solo and collaborative work with other people and bands. I was not familiar with A-Sun Amissa before hearing this track so I can only come into it with what knowledge I have of Baker's past work.
This one, long track which totals out at about twenty minutes, is definitely an experience. Much like with the best of ambient music, or drone music that isn't based in distortion, this is the sort of piece that just settles you down and lulls you into a state of blissful ignorance. It immerses you in it's atmosphere and just sways you with it's subtle, but powerful ambient textures. The buzzing hiss of amp noise that is prevalent throughout almost all of the track, acts as a grounder for the more spacial sounds that would otherwise drift into oblivion. At times it's incredibly cinematic in nature, recalling the work of something I'd hear in films like Duncan Jones' excellent Moon or, to a lesser extent, Alfonso Cuarón's Children of Men. At times recalling the emptiness of space, at others the darkness of horror, and at it's best, the majesty and beauty of life itself - though I'm getting way too philosophical here. I think that one of the benefits of this release is it's short length. Because it's only twenty minutes long, you can become drawn in and engaged with it without feeling like you've wasted an entire day floating on a cloud up in the sky (less so if you're not using drugs while listening), though, to be honest, I'd be perfectly content on listening to this for an entire day and feeling like I was on a cloud.
Overall, I thought this was a very solid piece of work. It sounds more like a score to a short film than a real album to me, though I don't consider that a bad thing. Either way, if you enjoy more cinematic and spacious forms of music, I'd definitely tell you to give this release a listen.
Overall Score: 8
Highlights: Scarpe Sensée
Posted by maskofgojira at 4:27 PM