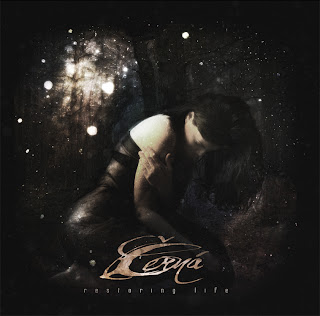 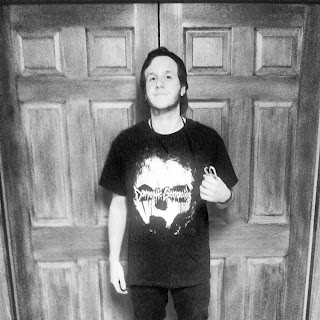 I was not familiar with Černá before receiving their album. I had been hearing the project's name mentioned by the guys in Súl ad Astral on their facebook page, and in the press release statement for the album it mentioned Cody McCoy's association with The Omega Experiment. Those two factors led me to give this album a shot despite not knowing anything else about it.
I pretty much figured out what sort of record this one was by the time opener Woken In Prague had finished. Frankly, while another post-rock inspired black metal record isn't a bad thing, another instrumental one is sort of boring at this point for me. So many one-man bands are popping up doing this style that it just feels like any life it had once had has now withered away. Sure, there are some clear highlights of people doing this blackgaze/post-black metal style, but a lot of it is faceless and lacks any sense of unique characteristics to set it apart from the dozens of other projects and bands out there. When it comes to McCoy's work in this project, I hate to say that I isn't exempt from that stereotype. If you've heard Deafheaven, Heretoir, or even Cold Body Radiation, you'll have heard pretty much everything this record has to offer.
Now, that's not to say that McCoy doesn't present a version of the style that is a bit more well conceived when it comes to the production side of things. In all fairness, this album is much crisper and cleaner than many other one-man, bedroom black metal bands sound. The drums are nice and punchy - though the kick is a bit too mechanical for my taste, the guitars are beefy and I'd actually say a bit heavier than many other bands would probably have made them and the cleaner tones are nice. I should also say that the album is not without it's highlights either. Since the majority of the album is dominated by the Společně tracks, most of the best things I can actually say about it come from that area of the album. With the opener just sort of being an average opener and the two "bonus" tracks (not sure why they're bonuses if they're listed everywhere as being a part of the actual album and I don't imagine this being the sort of album that they would release two versions of - one with the "bonus" songs and one without them - but that's just me) being rather dull. The point at which I found myself most engaged with this album was during these five tracks that make up Společně. McCoy does an effective job at crafting a very melancholic atmospheres throughout these five tracks, either through the use of cleaner guitars or piano. While the entire piece as a whole is not a winner, Part IV: Embrace The Stars goes on for far too long in my book, I will say that the album's best moments are contained within these five tracks.
I don't mean to trash this album, because it certainly isn't bad, I just can't say it's very original or all that grabbing. McCoy's take on the genre is unfortunately one that at least I have heard done similarly by many other bands and projects (though to varying degrees of success and failure). Maybe in the future McCoy will produce an album that really knocks me off my feet and really does something special with this genre, but until then I will wait patiently. If you enjoy post-black metal or blackgaze give this a listen, for others, if you haven't enjoyed the genre in the past, I doubt this will convert you.
Overall Score: 6
Highlights: Společně II: Laying Down In The Rain, Společně III: Night Sounds, Společně V: Lullaby
Posted by maskofgojira at 1:48 PM