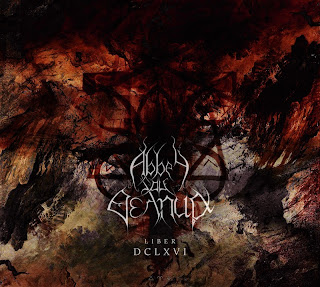 Abbey ov Thelema really blew me away with their 2011 self-released debut A Fragment Ov The Great Work. That record had all the pieces in the making for a great and experimental black metal act which really got me excited. When I finally found out about this sophomore effort I was extremely interested to see how the band had progressed their sound.
It has to be said, the band has definitely upped the ante when it comes to complexity and consistency when it comes to this album. I had a problem with the debut being a bit too naive when it came to a consistency of sound. The band definitely had talent in their songwriting efforts, but a couple songs on the debut didn't really work for me. This album really solves that problem by essentially making the entire album into a single track, more or less, through intros and interludes that sort of link one track to the next. Apart from that, the band also decided to make this album incredibly dense and compact sounding, with many things happening at once creating this weird sense of dissonance and bombastic orchestration that I have not heard in quite a long while. The band has taken on board a much stronger jazz fusion and/or progressive rock flair, which is most noticeable in the bass work, while also increasing the theatrics through a larger symphonic presence as well.
Stylistically, this record really takes that black metal sound and fuses it with the aforementioned symphonic and jazz fusion and/or progressive rock genres, and that's the main sound, but obviously, since I'm bringing it up, there are others. Flights of fancy bring out the occasional flair of technical death metal, electronica, industrial music, along with the occasional bout of circus based ideas. If you're familiar with avant-garde metal in any way, you already know how this goes, though it has to be said that these guys tend to throw in those other genres in the occasional instance instead of constantly shifting from idea to idea. Each track certainly expresses a unique sound for what it's worth as well, with I - De Apocalypsi Ioannis being incredibly chaotic and dissonant sounding while the likes of III - De Ascensione Imperii Peccati is a much more melodic and romantic (in it's orchestration) sounding. I will admit that some of the orchestration is a little bit cheesy and can definitely be called over-the-top in multiple spots, but I can forgive it for all of that because of how enjoyable that cheese is. I also have to mention the vocals which reminded me of Kvarforth (of Shining) for some reason whenever the vocalist was bellowing instead of screaming. Maybe it's just me.
I would say that the greatest downfall of this album is simply how consistent it is. For how dense the music is and all the various interludes and intros and outros that occurs throughout a given track, each track really could have been divided into smaller tracks (several smaller tracks in some instances). Most of the tracks on here top the ten minute mark and there are spots where a one section ends and another will begin where the track could have been separated. I'm not saying this is a necessary thing that needs to be fixed, but I just thought that knowing that a break was coming would have made it a little easier to sit through some of these epic tracks. Some of the abrupt shifts from blaring orchestration and blast-beats into solo piano might have been a nice point to cut a track into a smaller length, but that's just me, not a problem, just a preference.
It's a fun record, or at least I found it a fun record to listen to. It's definitely a bit too long and a bit bloated and dense with it's own ideas - so I think things could be pulled apart a bit either in just track lengths or in the actual compositions, but I can still dig what these guys are doing. Not for everyone, but if you happen to be a fan of more interesting forms of progressive and/or symphonic based black metal, than give this band's work a listen.
Overall Score: 8.5
Highlights: II - De Septem Signis et Septem Salpinibus, IV - De Condemnatione Magnae Babylon, V - De Hexakosioihexekontahexaphobia
Posted by maskofgojira at 12:06 PM