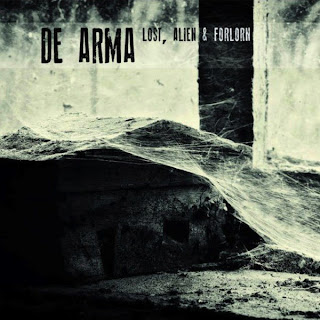 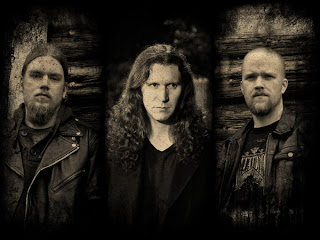 I had only heard about De Arma though their split with Fen back in 2011. Even then, I didn't really pay much attention to either their material or to the band simply because they featured a member of Fen in their ranks, and I was having sort of a love spat with the band at the time. Since then, Fen has released a record that is actually long lasting (more than a few listens) so I decided to give this album a chance.
Sonically, I have to say that De Arma isn't a drastic shift from Frank Allain's work in Fen. I mean, of course there are some difference, but there isn't as big a change as I think I expected. I remember reading some reviews of that split and hearing that De Arma's material was actually the highlight on it. Before listening to this album I went back and listened to the three songs from that album and frankly I didn't think they were anything special. They were alright, but I wouldn't say they outshined the songs Fen contributed. The sound of the band is, at least my opinion, Fen with a lot less metal. For the most part it's very atmospheric metal, sort of like Katatonia actually, and after thinking about it, it does actually sound as if Allain was going for a similar style of singing as Jonas Renske from that band. That in and of itself isn't a bad thing, Katatonia are a great band even if I really disliked their last record, and De Arma do try to add a bit more of a post-rock and shoegaze influence into their songs, but I wouldn't say it was enough to really grab me either way.
This isn't a bad record, but frankly, it shares almost the exact same flaw I had with Fen's 2011 album, Epoch, which was that, while I can't say any of it was bad or not enjoyable, after a while the flatness of the sound just put me to sleep. If an album puts me to sleep, I have to take that into account in my review. I don't have any qualms with what these three guys are trying to do musically or aesthetically or anything, but the sound on this album just lacks the right dynamics to keep me interested. The album never really gets loud or gets soft. I'm sure the band have parts where both those things happen, but the sound of this album just makes it sound so one-dimensional it lulls me to sleep because there are no blasts of aggression (which this album doesn't really need) and there are no contrasts with sections where the music becomes even softer. It doesn't help that Allain's voice isn't the most dynamic or expressive out there, so his imitation of Jonas really just adds to the flat production tone. When he lets out a black metal snarl, I will certainly say that it makes a difference, if only because it means the band is trying to make their song a bit more intense or aggressive. The only track that really got my attention for being a bit more interesting was Behind These Filth Panes which had an interesting riff in it that made the song stand out from the more shoegazing atmospheric metal that the rest of the album is filled with. Also, I just need to say that drummer J. Marklund is a beast as always behind the kit and was easily my favorite parts of pretty much every song on here with his various fills and interesting approaches to how dull the pace of some of these songs can be and probably would have been without him backing them.
So, overall, this was an album that did pose a problem for me in reviewing it. I wound up listening to it many times before I could finally gather an opinion that might be worthy of some substance. The album and band aren't really anything special, at least in my opinion, but the problem for me lies in the production. I hope if you decide to listen to this album you do not encounter the same problem I did with it.
Overall Score: 7
Highlights: Left to Hide, Behind These Filthy Panes, Wretch
Posted by maskofgojira at 12:05 PM