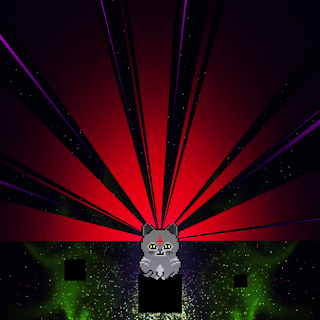 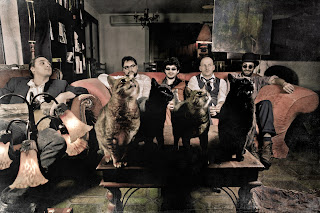 A couple of years back I had discovered a little band by the name of Pryapisme and found out about their love of cats. I was lucky enough to not only buy a copy of their debut full-length (in which I got a nice meow note included) but interview the band as well. I can assure you that this was a pretty hotly anticipated album for me.
There's just something about quirky bands like Pryapisme that I just really dig. How they are able to go between so many different genres and make a coherent (which is debatable depending on who you ask) song is a complete mystery to me. I loved their first record because it took all of the great elements that I love from groups like Mr. Bungle, Maudlin of The Well, Naked City, among others and just threw them into a literal blender and the result was a given song. Tracks would jump between blasting black metal sections, smooth jazz piano lines, bouts of dance music, and the occasional reggae part; but this new record just builds upon that by making things even more insane. This thing combines so many different ideas it's hard to make it through a single minute of a song without hearing something new. It's a mindfuck of an album pushed to the extreme and I just know that there will be many people out there who will absolutely hate it, while weirdos like myself will continue to praise what guys like these do with a band like this. This is a sort of band and record that I just love to listen to because every second holds another surprise. I could listen to this album a dozen times and still be shocked by a sudden shift.
Because this is the sort of record I'm pretty much predestined to like, I'm not sure how much you want to buy into this review since I can assure you right now that I love pretty much everything about this album. From it's schizophrenic song structures to it's maniacal atmosphere down to all the different genres it plays around with throughout its ten tracks. There's 8-bit keyboards, salsa inspired guitar solos, thrash and sludge metal riffs, blast beats flowing into four on the floor dance beat, and orchestral strings happening on here, and that's just in Random Jean Vigo. It's like listening to Mr. Bungle on speed for the majority of this album and I can't help but love that idea. Yes, there's some flirtation with some genres that I'm not particularly fond of (dubstep and ska) but I can get past it because it's like the band will play it, then four seconds later it will shift to something else entirely. There's also variety in the track lengths, from more epic eight minute tracks to shorter one/two minute long bursts, each track has relevance, and there aren't a whole lot of albums like that.
Also, not that it particularly matters too much, but because this album is almost entirely instrumental (there are a couple of vocals and samples used on here) it really frees the music up to just push down all the boundaries. The band still manage to keep some semblances of songs during some instances, but for the most part it's loose. For me, I found it to be quite freeing to hear a band shift from one idea to the next without so much as a pause in between. I think that the music might not be quite as unrestricted as it is if there were vocals used on top of the it as often. There might also have been a need to reign in and maybe write something a bit more structured, or at least have parts repeat a few more times. Regardless though, as an instrumental group, this is some of the most liberated and fun music I've heard all year.
So yeah, not sure how much you'll end up reading into this since this is the sort of music I love to hear so I'm naturally very biased, but hopefully you'll still give this album a chance. If you can handle the abrupt genre shifts and the frenetic nature of the music, I think you'll really be able to get into this album. It's a total blast to listen to and one hell of a ride if that's what you're into. From me though, I don't recommend passing this one up.
Overall Score: 9.5
Highlights: Every Track Is A Highlight
Posted by maskofgojira at 4:43 PM