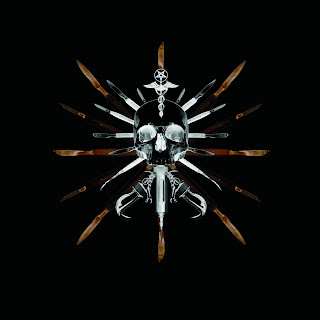 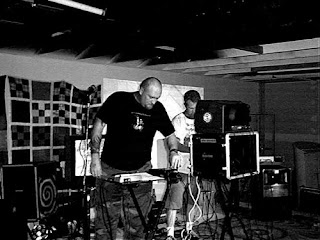 Until receiving this album in the mail, I was not familiar with the band that is known as Steel Hook Prosthesis. Frankly, I've waited for something like a month or so before even covering it because I was a bit apprehenscious about it. So, finally, I'm giving in and attempting to write about this album.
Before even pressing play on this thing, I looked the band up and was shocked to see their rather extensive discography. The number of their releases is quite daunting for someone who (as I have said and will continue to say) is not into power electronics. So, because I know those who will most likely be reading this are already fans of the band and will more than likely jump down my throat for not knowing enough about them or what they have done, I'm simply going to judge this album based solely on listening to this album. Nothing from their past material has had any influence on what I'm writing here/you're reading here - and obviously it's my own personal opinion so get over it if you can't deal with that. But onto the actual album itself.
Since I'm not a huge power electronics (or death industrial) fan, and from the various albums that I have been sent and that I have covered from Malignant Records, I have become more acquainted with these genres that I think I ever would have been if they had not first contacted me. While listening to this album though, I have to say that I was actually sort of surprised by the amount of restrained shown by the members. One of the most annoying things I've found within this genre has been the use of effects on the vocals. All the chorus, distortion, and other effects are all well and good for a little while, but I have not found an album yet where they have been the primary use on vocals that I have liked. After a couple of songs it not only gets old, but it just becomes extremely annoying and quite aggravating; so when I say that this album actually did that and still managed to win me over, I think you can guess about the rest of this review. I should also mention that unlike many other projects that attempt this, the vocals on this album, particularly on Disease Incubator, actually came across as menacing. I mean, musically, it's pretty standard fair, you have plenty of clangs, bangs, yelling, and screaming, among other ghastly things being played or shouted in a dank basement, but where this album succeeds is in it's restrained, as I mentioned above. This album keeps things pretty controlled and ambient for the better part of it's running time. It feels more like a dark ambient record than a power electronics one during most tracks.
Of course there are some blasts of distortion, of course there are samples, and of course things go out of control and the album is too long for my taste in this music, but to return to restrain, none of the songs are that long. Based on those previous albums that I've heard from this label and these genres before, songs tend to get thrown to the wayside, which is fine if the project in question can actually craft something interesting and unique throughout an extended period of time, but most don't. Either by choice or coincidence, this album is made up of songs that are around the four-to-five minute mark, with the exception of two tracks. That allowed me at least to remain engaged in a given song without becoming completely bored with it. Normally, I'm all for long songs, but when a band can write a short song that accomplishes just as much as a longer track, that impresses me even more. Songs like Gula and Disfiguring Aesthetics are some of the best pieces of music I've ever heard from these genres of music (up there with the likes of early Prurient in my opinion) and that isn't something I would say lightly.
So, in the end I was really impressed with this album. While I wouldn't claim that it blew me away, it certainly did surpass any expectations I had for it by far. This might not be for everyone, I know a lot of people out there aren't into these styles, similar to myself, but this might actually prove to be a solid little gateway album to at least check out if you're at all interested in these styles.
Overall Score: 8.5
Highlights: Sadomedica, Gula, Disfiguring Aesthetics
Posted by maskofgojira at 9:27 AM