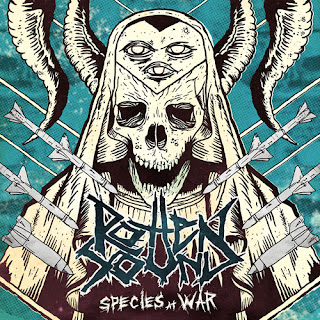 There are very few grind bands that can consistently get right. For as much as I love groups like Napalm Death (who really aren't a grind band anymore) and Brutal Truth, I find that even they have been willing to experiment - which is never a bad thing. But sometimes all I want from a record is a swift kick in the nuts and a punch in the face.
That's where Rotten Sound come in. They are a band who never stop their quest in perfecting their grinding. Yes, some recordings are more crusty than others and some songs actually break the two minute mark, but in the case of this EP, which was released earlier this year, it's just a the perfect example of the metaphor I described above. Six songs with the entire release being under ten minutes. Frankly, this is the perfect way to wake up (which is what I am currently doing while writing and listening to this). It's just insane how good this band is at making songs this short and aggressive consistently grabbing. Most grind bands can pump out plenty of songs, but these Finnish men really get how to do grind and crust effectively. From the instantaneous bursts of Cause and The Game to the more dynamic(...?) The Solution the band have a formula for writing and releasing some killer, crusty, and brutal grind.
I wish I could write more about this record, but that's about it. This thing is killer, it's short, and it's fast, plus it doesn't overstay it's welcome. It's just the way I like to wake up in the morning - just don't drive with it playing cause you will get a ticket for speeding or something. Killer grind from one of it's modern masters.
Overall Score: 8
Highlights: The Solution, Salvation
Posted by maskofgojira at 11:21 AM