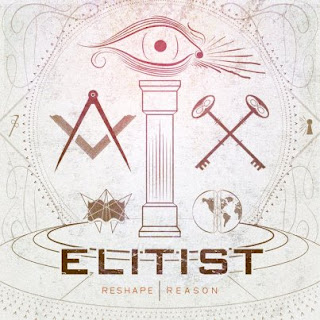 In recent months I've been hearing and reading things about Elitist that piqued my interest more than the band had originally. I've heard and read things about the band since their inception and they first released their Caves EP back in 2010. I've pretty much ignored them but this full-length happened to catch my eye/ear.
While I wasn't overly impressed when I listened to Elitist's Caves EP, I do recall listening to a couple of tracks from their Earth EP last year and thinking they were pretty decent. Honestly, I don't remember what song it was that I played that got me interested in even hearing this album, but it did impress me in ways that their previous material had not been able to do and it's apparent from the opening notes of opener Unto The Sun that the band is certainly at the top of their game. The songwriting on here is a lot better than, honestly, it has any right to be. Because the band is essentially a metalcore band playing with the ideas of more progressive ideas that emerged from the djent scene, so Periphery, The Safety Fire, TesseracT, etc., I do think they could have gotten away with making a far more mediocre album than this and still done quite well. But that's not what happened. The band actually wrote a really solid batch of songs that are pretty memorable and interesting. I've heard plenty a modern metalcore record and even progressive metal/deathcore and it's essentially been that style, but with off-time chugs during a breakdowns, and that is kind of what I felt these guys were doing on their first EP, but on here their songwriting has really come into its own, with dynamics and melody becoming far more prominent in their sound. There are just as many nods to the likes of Periphery and Meshuggah as there are to groups like mid-period In Flames and At The Gates, which is a good thing.
Each song stands out and manages to either pump out an interesting groove or melody that sticks with me. I'm not going to lie and tell you that this does not have the makings of a -core album though. The vocals definitely have that sound, though I did find them to be well done and quite varied in pitch and tone throughout, and there are several breakdowns that I wasn't overly keen on, but I'd say that this is a few notches above anything I've heard from the genre in years. In addition to that, no matter how staccato the grooves are on here, the band never forgets melody and its presence does escalate them from being a solid band into a very above average one. Personally, while the majority of vocals are screamed or growled, the few tracks that make use of cleans, I think are well done. They're certainly not the most original sounding cleanly sung parts or anything like that, but I have to at least admire the band for trying to do something a bit different with them, as in using them in more of an atmospheric way, hear Equinox, though it is still a chorus. It has to be said however, that this is not a dark album (something I bring up whenever it's apparent). It's pretty bright and clear sounding, and if you're like me and you tend to enjoy darker music, than this might not gel with you immediately, if at all. Granted, I was able to deal with the brighter sounding tones and production only because the music as more upbeat and bouncy (maybe not the right word but I'm sticking with it). It's fun and light, but it has substance if you're looking for it.
Coming from someone who wasn't originally a fan of the band, this album definitely impressed me. I look forward to where the band go to next after giving me as well crafted an album as this one. While I know it isn't going to be for everyone, I definitely encourage any fan of metalcore, melo-death, or djent to definitely give this album a chance.
Overall Score: 8
Highlights: Time Stands Still, Life Lost, Scared Geometry
Posted by maskofgojira at 5:29 PM