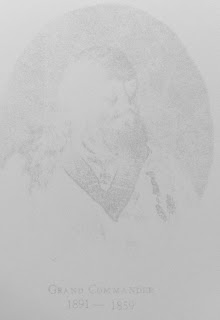 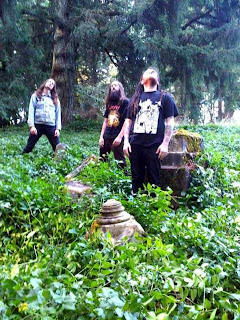 I've been meaning to get to this release for a while now because I think that it is worth covering (duh). I have not heard the demo that was released back in 2009 but I am assured that it is very good, so based on that alone I decided to pick up a copy of this. Being over two hours long I knew I was in for one hell of a treat when I pressed play on this for the first time.
Now, I don't care what style of music you make, but when you release a song that's just about two hours long (and I am certainly aware that this was split into two tracks so it could be on two sides of a tape) you better make it good. Obviously this isn't The Flaming Lips here, it isn't as if I've reviewing a twenty-four hour long song, but two hours is still long and, frankly, longer than a majority of people would want to spend listening to a single track. Then you realize the style with which this group happens to play, drone-doom, funeral doom, and whatever other uber slow forms of doom you want to throw into the pot as well. These facts alone are enough to scare of the typical listener, I mean, sure, there are people who love drone-doom and will listen to it all day, but I think that even they might find it a bit taxing to just sit down and listen to a two-hour long drone-doom album while doing nothing else. Personally, and I'll just come out and say it, this was a huge pain in the ass to sit through. I love drone-doom as much as the next weirdo who couldn't get a date in high-school, but I can only tolerate so much before getting fidgety and needing to get up and actually do something. Maybe it's just me, but when I sit still for too long I get tired, and there were several points when listening to this where I did feel my eyelids getting heavier.
With all that being said, I'm not going to pretend that there isn't a unique charm to this album. As I repeatedly made note of above, I do think that the length is a problem for me, but I do understand that there will be some who can and will listen to all two hours straight through and enjoy it. While I found it hard to remain engaged for the entire duration of the album, I also understand that those who really enjoy this sort of stuff will find it interesting and possibly even hypnotic. The main melody on the first half of the track is quite reminiscent of early 90s death-doom, sort of My Dying Bride-esque in my opinion, so I did enjoy whenever that popped up. The second track dives much further into the drone realm, which I will say I did not enjoy as much as the more drone-metal of the first half of the track. It's much noisier and, in a certain way, psychedelic that just sort explores this emptiness created by feedback, noise, and ambiance. It really isn't until the last twelve or so minutes during the second half of the song that return to the main theme from the first half.
In the end, I couldn't help but feel bored at certain point while this was playing. I think it was the overall length of it rather than the music itself, which I think would be more tolerable if I had just listened to the two halves separately. If you like drone doom, funeral doom, drone music in general, or other really slow stuff like that, you'll probably get quite a lot of enjoyment out of this.
Overall Score: 8
Highlights: Maurerische Trauerdrohne I
Posted by maskofgojira at 6:25 PM