Between The Buried and Me - The Parallax II: Future Sequence (2012) 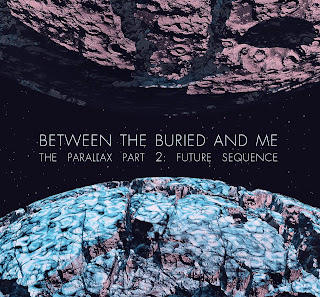 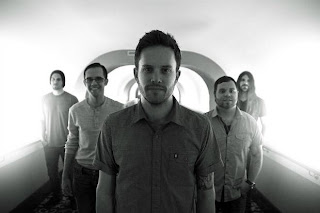 For as much as I love progressive and avant-garde groups, it took me quite a while to get into BTBAM. I don't think it was until I heard the second half of their 2008 album Colors that I really began to understand what they were going for (this was also about the same time I was really getting into groups like Opeth and Dream Theater as well). Now, several years later and we have the band expanding their sound even further into the realms of concept driven albums.
Personally, ever since I started listening to BTBAM, I've felt like they've been on a consistent upstroke. Both Colors and The Great Misdirect were great albums that really expanded the accessibility for progressive and experimental tendencies in the modern metal world (or at least that's how I see it). With the release of this album, we see the band streamlining their sound into a much more cohesive beast that is less frenetic and spastic and more melodic. Granted, anyone who says the band has abandoned their quirks obviously hasn't listened to the album because they're all over, they're just not quite as blatant. Also, while I never found them to be so, I am aware that there are some people out there who do find BTBAM's older material a bit too jarring and don't really get the whole genre shifting thing, and I do think that this album is more palatable despite still being quite experimental in the grand scheme of things.
Even though this album isn't quite as eccentric as either of the full-lengths that came before it, the band still manage to fit in those quirky melodies that remind me of why I love them. That Mr. Bungle influence is something that they just can't seem to get rid of, and I hope they never do, as exhibited on the short Bloom. In addition to that, the incorporation of extra instrumentation like a violin, tuba, and flute (just to name a few) really does add that flair of color that makes certain parts stick out. I can't recall the band actually going out on a symphonic kick before this album, but those parts do feel grandiose and powerful, which is far more than I can say for plenty of symphonic metal groups. There's also several more dissonant and crazy riffs, hear Silent Flight Parliament, which I've always been a fan of, and it's great to hear them still included in the equation.
I can't say that I was overly hyped on this album when it was first being announced, probably the thing that got me interested was guitarist Paul Waggoner's response to the question of how this album differed from their other material and he responded with, "It's our longest album." No, "It's our heaviest. It's our most melodic," or whatever, but that seriously make me laugh out loud and was enough to get me interested again. While I can't say I was overly impressed with the first track that was released, Telos, not that it was bad, but it wasn't ever going to be my favorite track the band has ever released, I have to say that it's placement in the album does work. This album definitely follows in the footsteps of Colors in the sense that the entire record is cohesive and fluidly transitions from one section, and song, to the next without any slippage. There really aren't that many bands that I can think of offhand that manage to make interludes so poignant and actually worth listening to on an album, and whenever I pressed play, whenever one of those one-minute, two-minute long tracks, I never felt the need to skip over them.
I know that BTBAM isn't everyone's cup of tea, but this album is, at least to me, their most accessible release to date. It's new territory for them but is also a good entrance for newer fans. Check it out if you have any interest in more progressive forms of metal, or if you're a long time fan - in which case you've probably already heard this.
Overall Score: 9
Highlights: Lay Your Ghosts to Rest, Bloom, Silent Flight Parliament
Posted by maskofgojira at 9:35 PM