Solace and Stable - The Systematic Erosion of Integrity (2012) 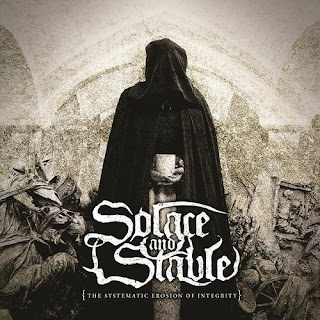 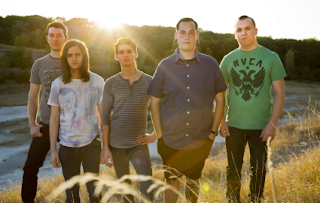 There's a reason why metalcore is going/went out of style, it's dull. A majority of the bands that even I liked when I was first starting to get into heavier music have gone to crap and now sound like your generic radio metal band with some screaming. I've recently been looking into the genre to see if anything interesting was happening, and this was one of the results.
I've read a couple of reviews for this album and after listening to it a few times, can confirm that comparisons to Between The Buried and Me are not unfounded. While this is nowhere near as exciting or experimental as BTBAM is, this band is perhaps a much easier and accessible band to more modern -core fans who find BTBAM too over the top and progressive. I can't say I've heard Solace and Stable's debut album, so I'm not sure at how much they've improved since then, but it is clear that they are trying to push their ideas away from any form of -core sound and into more areas that are more technical and progressive. Each of these guys can play their asses off, without a doubt, but there's something holding them back, and unfortunately that problem happens to be the vocals. While they're perfectly fine and adequate for what they are, it is perhaps the biggest link the band has to any -core sound; and yes, there are a couple of breakdowns on here as well for those wondering. Personally, while they won't offend anyone, I did find myself tiring of them whenever I reached the half-way point on the album, maybe that's just me, but I really felt like there needed to be more variety in that department since the music was always moving in pretty cool and interesting directions.
These songs are all pretty short and in almost all of them, the instrumentalists always appear to be trying to pull the song into a million different dimensions, and I don't mean that in a bad way. I think it's great that one minute they're being all techy and progressive, the next they break into a more open melodic section before transitioning into a more standard rock build up and then into a short breakdown, for example in Alive In Brokenness. With that being said, the majority of these tracks are just not all that memorable. They sound great while I'm listening to them, but once one track ends and the next begins I couldn't really tell you anything specific about the track that just ended (with the exception of a few). I can appreciate good musicianship as much as the next guy, but that can only take you so far. The musicianship on every one of these tracks is enough to make some people want to stop playing, but very few tracks stick, and that's a real problem. I also felt like there was a real lack of variety on here as well. Because most of these tracks are around three or four minutes long and they're all pretty fast and technical songs, things do begin to feel a bit samey after a while. When the band introduce more melodic passages on tracks like the aforementioned Alive In Brokenness or The Hollow Present, it makes a difference. I just wish there were more of those moments or that there were some slower parts, if only to break up the monotony. Variety is always a welcome addition to an album in my book.
It's a solid album, not great, but not bad, just solid. Maybe I'm selling it just a bit short, since while it was on, it was entertaining and quite fun. It's not going to win any awards for originality but if you happen to be a fan of more modern technical and progressive metal but have a hard time getting into anything quirky or weird, this might be an interesting gateway band.
Overall Score: 7
Highlights: Alive In Brokenness, The Apparatus, Past of Persistence
Posted by maskofgojira at 8:11 PM