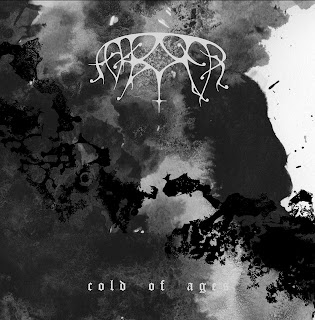 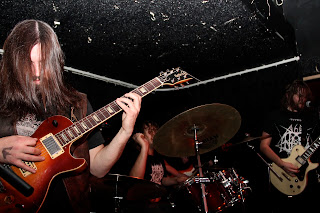 Last year, Ash Borer made quite an impression on the underground metal community with their self-titled full-length. When I heard about the band being signed to Profound Lore I was both happy and disappointed. Happy that they were making a name for themselves and going to get bigger, disappointed because now they're not the same unknown little band that I sort of held close to my heart.
Right from the get-go, let me just say that I think it's great that even though Ash Borer signed to a label as respected and well known as Profound Lore, they actually made a record that's even more atmospheric than their self-titled, they didn't conform to the style of other groups on the label. While previous recordings held this sort of unhinged aggression that was channeled through these epic pieces of atmospheric black metal, this new album experiments with more variation in that sound. The majority of the album is still fast and direct black metal riffing, there are more spaces of open synth and slower doom passages. I was a little surprised to find that the role of synth and keyboards had a much larger role on this album than on the band's previous material, or at least that's the way it seemed to me. Not only are there entire sections that are devoted to synth but there are several points on a given song where they'll emerge from the background and carve out a far more epic soundscape. Just because I know some people were really excited about it, I didn't think that Jessica Way's presence on the album really did anything for me. She wasn't bad, but I didn't really think she added to anything on it. In addition to that, as I said above there are more slower passages on here than I can recall previous tracks containing, and I think that does add to the impact of this album. High speed tremolo picking can only take you so far (unless you're Krallice, because then apparently you can do high speed and higher speed and still make it work) and the incorporation of slower doom parts really does help to make the album feel more well rounded.
In the past, Ash Borer has maintained a pretty rough and raw sound, in regards to the production on their tracks. It felt very natural and authentic without coming across and lo-fi or underproduced. This new album is cleaner than their past recordings, but still maintains that authentic sound that doesn't sound, at least to me, like it was tampered with too much, if at all, after the initial tracking was finished. When performing long tracks like this, I do think that it's important to keep the sound pretty clear so the cleaner parts don't simply fade into the background, like on Convict All Flesh for example, the clean melody played during the bridge of the song comes out sounding very clean and not overly loud or compressed. It doesn't mesh with the distorted guitars at all. Personally, I did think the snare sound was a little loud at certain times, but I'd assume that that's just from hitting it harder than an actual mixing problem.
While I don't think I was hit with the same impact that I was from the band's debut full-length, I still thought that this was a great piece of work. It's an album that does have a wider margin of appeal because it is more varied in style and it'll be interesting to hear where they go next. If you like black metal in any form, I highly suggest you check this one out.
Overall Score: 8.5
Highlights: Phantoms, Removed Forms
Posted by maskofgojira at 9:15 PM