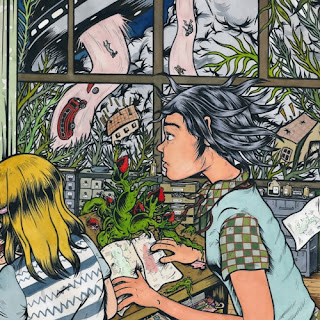 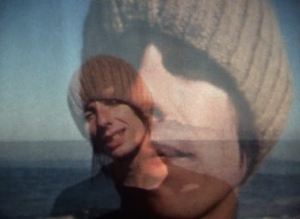 My first introduction to TwinSisterMoon was several months ago when a good friend of mine (J. Rosenthal) was posting about how great this project was. Like most things he recommends, I looked into it and found quite a plethora of material to listen to. Having said that, I only just started listening to the project's stuff when I found out about this album.
Being the solo project of a one Mehdi Ameziane, this project has gained some notoriety for its rather wide spectrum of ideas on albums. Taking cues from haunting pieces of ambient music, lo-fi folk tunes, or the occasional extended drone track can all be found in the project's back catalog, and is essentially what you'll find on here, minus the drone songs. In a way I'd call it a schizophrenic sort of album because it jumps back and forth between the ambient pieces and folk songs with little to no intermingling between the two on here, though, in a way, it's also what makes the album quite the endearing little bugger that it is. By switching between the two styles for every other track it does provide a sense of relief, of sorts, in that whether or not you enjoy the ambient parts, a short folk tune will follow, or the other way around. Sure, the pattern is a bit predictable, but it works for what the album was set out to do. In a way it almost felt like someone got Brian Eno and John Darnielle in a room together and told them to write songs completely independently, and this record is the result of it. It's really only on The Mirror Land where you get a seamless transition from one style to the other with no gap or break in between, just effortless fluidity and beauty tucked into a six minute package.
It has to be said that no matter whether Ameziane is doing ambient or folk tunes, there is an inherent beauty in his writing. In the handful of times I've listened to this album, whether it was during the day or at night, I never felt any sort of darkness or anything that sounded like it was influenced by anger or sadness. Yes, there's a certain degree of melancholy, but it's sort of a joyful melancholia that isn't found on a whole lot of releases. I don't expect a bunch of people to rush out and check this out right away, it really isn't an "exciting" album, but what it does have on its side is beauty. Yes, I say a lot of albums are beautiful, but there's an innocence and naivety to it that gives it an almost childish sort of vibe; and I mean that in the best possible way. Ameziane's voice doesn't help in the childish vibe either, being very feminine sounding at times, though that isn't a bad thing when it comes to this style. It's very delicate and unassuming, and could easily fall into the background if you're not paying attention - which could be applied for both his vocals and the music itself.
In the end, the best that I can say about it is that it is a fantastically beautiful album that will stay with you if you let it. If you have the intention to just come into this and expect it to move or impress you, chances are that you will be disappointed, but if you come in with an open mind, you might just find a classic on your hands. If you enjoy folk or ambient music this is a must, but I'd say that if you just like beautiful and relaxing music in general this is worth checking out as well.
Overall Score: 8
Highlights: Colony Amnesia, The Mirror Land, Tunguska
Posted by maskofgojira at 7:41 PM