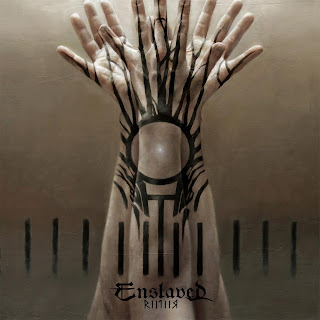 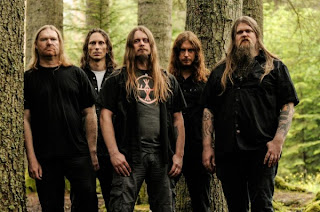 It feels so strange to me as I listen to several of the albums in Enslaved's back catalog that without knowing of it, Enslaved has actually become one of my favorite "black metal" groups. I remember discovering them a little while after I first got into Opeth and thinking they were a cool band. It wasn't until now that it hit me that I can't really say they've ever bored me or done anything bad in my eyes.
Enslaved are really a band that you can count on to deliver, at the very least, thought provoking material for each and every release they put out, whether you like it or not is another story though, and this album is no exception. After the return to a more aggressive black metal sound on 2010's Axioma Ethica Odini and a couple of side ventures into more atmospheric driven material on The Sleeping Gods and Thorn EPs last year, we have the band shifting yet again into possibly their most progressive form to date. Taking the aggression from their more recent material and essentially sticking it into a modern prog-rock/jazz-rock format that is just as intense but less direct in its emotions. It throws a bunch of ideas at you all at once including, but not limited to, metallic hardness, progressive riffs and structures, post-rock influenced climaxes, and folk melodies, and expects you to keep up. There's no track on here that is "single" material in the sense of it being more accessible or out of place, even though opener Thoughts Like Hammers was indeed released as a single.
I've always thought Enslaved knew how to write great and memorable riffs, and they are at the top of their game on here. They're not exactly the most typical riffs, meaning, they take a rather typical sounding idea and will just slightly mess with it, causing it to sound completely fresh. Tracks like Veilburner or the title-track do this with aplomb, taking pretty standard black metal riffing tropes and making them just slightly more jazzy or progressive. In addition to that, no matter how weird the riffs are, they are always kept in the format of an "actual song" and never fall off into straight-up wankery, which is what an album like this could have quite easily have become if it wasn't Enslaved playing these songs. Being progressive and different never comes at the expense of the song or a melody. Let them go off the reigns and they will come back, and that's something I admire greatly about the band. In addition to that is the use of keyboards and synths on here, which perhaps drew more of my attention than on any other record from the band. Yes, there are the standard mellotron, piano, string synths, and various ambiances, but some of the arrangements on here just blew my mind, like the harmony done with the guitars on album centerpiece Roots of The Mountain. Though my favorite album from the band has been their 2003 masterwork Below The Lights, this one might just rival it, and that's saying something seeing as these guys have yet to release anything I consider even standard.
From my point of view, not only is this one of Enslaved's most accomplished albums musically, but vocally as well. Herbrand Larsen's vocals have really come a long way from when he started in the band. You can practically hear the confidence he exudes when he starts singing, and he really brings those choruses to life on here. His evolution has really been one to marvel at, starting rather withdrawn and gradually becoming more and more powerful to the point where a majority of the choruses he sings on here are actually quite anthemic. This is also the most varied I've heard Grutle Kjellson in a while, bringing back some of those lower growls that were used a lot more during the band's middle period.
This turned out to be a better album than I had any right to expect, and is up there with the best of the year. The streak of great albums from this band continues as they have yet to put out anything that I find in anyway dull or even average. If you enjoy progressive and powerful music, in any way, I have to recommend this to you, it's great and you should listen to it. That is all.
Overall Score: 9.5
Highlights: Every Track Is A Highlight
Posted by maskofgojira at 8:09 AM