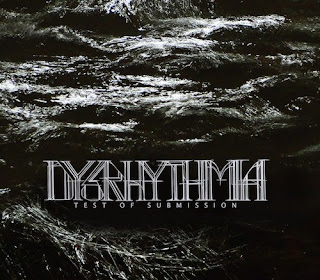 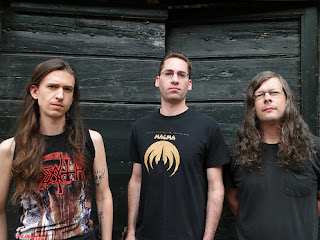 I have to be honest and say that this is my first Dysrhythmia album. I've certainly been aware of them due to Colin Marston's involvement with them, but I've never taken the time to really look into them. I actually wasn't even going to cover this originally, but I had space on a CD and put it on so lo-and-behold, is a review for it.
Honestly, I'm pretty much at the point where I could listen to anything Marston puts his name on or associates himself with and be impressed by it in some fashion, this album being no exception. I was somewhat apprehensive to listen to this band simply because it's an instrumental progressive metal band, and god knows how many of those there are out there, and how many are actually worth your time, but I finally gave in and listened to this album; and you know what, it was actually pretty good. It's certainly a far cry from the Dream Theater worship of most prog-metal outfits, not that that was what I expected from this band at all, but there was always that sense of worry that it would just dive into needless self-indulgence and wankery. I was actually pretty surprised by how focused the band was on songwriting, these are all songs and never felt like a rhythm section backing up a guitar player who wants to solo a lot or show off his chops. It's very tastefully crafted with plenty of trademark ideas from both Marston and guitarist Kevin Hufnagel's other gigs. Opener In Secrecy was a great place to start this album off with some great Krallice-esque sliding harmonies though keeping the track noticeably shorter and slower than any of Krallice's material. The title-track opens up with some very bassy tapping sections that recall a bit of Behold... The Arctopus' legendary technical status. Those are just the first two tracks, and I can assure you the album becomes less similar to other groups as it goes on - but that's a good thing.
This was definitely a grower of an album though. I did enjoy it when I first listened to it, but I was definitely less enchanted with it than I am now. There were several more songs that I didn't quite grasp but have since grown on me. Probably the first song that struck me and I connected with almost immediately was the melodic Running Towards The End which just has one of the most beautifully crafted guitar melodies I've heard all year. There are similar moments on other tracks that strike a similar chord with me but that was the first track that really caught my attention and made me want to continue to listen to the album. But to say that this is a melodic record would not be entirely correct, while I didn't find it all that heavy, there are certainly parts of dissonance that I really enjoy. Those short bursts of technicality that just remind you that these guys aren't just making another melodic instrumental record, these guys like to make something a bit more challenging for the listener.
I was very impressed by what the album wound up being and I'm glad I took the chance to actually listen to it. This is also the sort of album that makes me want to go back and listen to the group's older material to see what I've been missing out on for so long. Anyway, if you dig progressive or jazz influence metal or rock this is an album I definitely recommend checking out.
Overall Score: 8.5
Highlights: The Line Always Snaps, Running Towards The End, Like Chameleons
Posted by maskofgojira at 5:52 AM