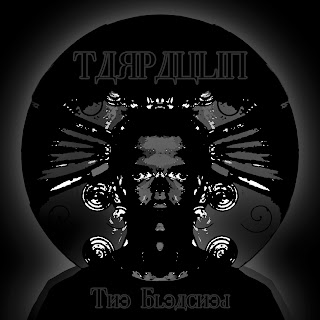 As far as I know this is the first recording of this southern Illinois group, but there is almost no information out there on them so forgive me if I'm incorrect. It's really hard for me to come up with things to open up a review when there's almost nothing out there for me to comment on or introduce my perspective on to you (the reader). So let's just get right into it.
It's been a little while since EEE Recordings put out a release that wasn't from one of the Nji-related bands (as far as I know, this band has nothing to do with them), so I was unsure what sort of style this was going to be. The short description describing the album basically said that it was ambient black metal with spoken word vocals; and in response to that all I can say is, that's true marketing for you. That is exactly what this album is. Frankly I can't make out a word of what the vocals are actually saying except for maybe the odd line here or there, but it's so processed that it kind of makes it hard to even hear the vocals at times. I'm not saying that as a fault, because for all I know that may have been the intention of how the album was mixed, but they're hard to make out. They sort of have that boxy kind of phaser effect on them which sort of makes them sound almost industrial-ish in a way. If vocals and lyrics help to reaffirm why you like a certain band or album, this one might cause you a bit of trouble.
On the instrumental side of things, this band definitely likes to take a pretty aggressive style of black metal and wave it in the listener's face/ears because they totally screw with the production. Once again, not meant as a negative. Four of the five tracks on here are short, aggressive bursts of black metal with touches of doom thrown into the mix, with the last track veering off into droning territory that isn't all that different from what Oaks of Bethel have been doing on their records. But the entire thing has that sort of signature EEE production sound where it sounds totally reverbed out and everything just sounds so hazy and thick sounding that it can become difficult to pull things apart. Black metal gives way to drone and drone turns into a psychedelic soup of sorts where various effects all intermingle with each other and blend into trip, if nothing else. It's a hard record to get into, from my experience because the first four tracks are just so driving and aggressive, for the final track to just sort of derail and fall into psychedelic drones felt a little unsatisfying personally. Maybe it's just me who felt this way, but it was a problem that I could not get past.
Unlike the work that the duo in Nji do, I found this a rather bitter pill to swallow, not because it was bad or anything, but it is quite different. It's certainly not going to be everyone's cup of tea and might piss a few people off but it's at least worth hearing this year. If you like drone-doom or ambient black or something in between the two, this is an album you're going to want to buy, otherwise, look into it first before buying.
Overall Score: 7.5
Highlights: Little By Little, Bound For Zar
Posted by maskofgojira at 2:42 PM