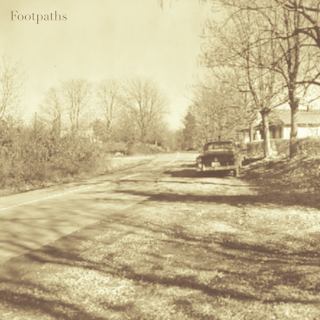 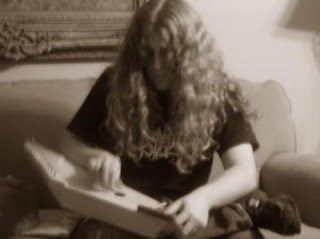 The work of the one man involved in this project has been quite busy this year with his various projects, and this is simply the latest in his string of releases. Taking his work in folk music into a more drone and ambient based direction, as opposed to the typical folk style. After hearing this project's rather well done ideas on the split with Bunrage earlier this year, I was very intrigued to hear these new songs.
On that aforementioned split release, Footpaths showed us a calming, ambient take on creating folk music, but it was still essentially that, folk music. An acoustic guitar and various other droning instruments. In that sense, this full-length is no different as you have an acoustic guitar (three different actual guitars but regardless), harmonium, melodica, pennywhistle, and voice, but the output has shifted slightly. For myself, I felt as if this was a more ambient and droning batch of songs with more tracks tending to wander off from softly plucked guitar passages into straight-up ambiance on several occasions. The opposite happens as well, where ambiance will lead into a guitar led part as on the beautiful Deepwater, MO. More often than not though, the songs feature a nice balance of the two. The production has also taken a step up from the material on the split as well. While it's still rather lo-fi and unpolished sounding, there aren't as many pops and hisses of distortion on here as there were before, which does up the ante in that regard.
Whether intentional or not, the album flows together as a single piece of music quite well. I had a problem mistaking where one track would finish and another would begin several times when listening to the album. Now, I wouldn't call that a problem but I do know that some people like a bit more separation in their tracks so they can figure out what track is which, I don't bring that group a lot mainly because I don't think that an album would be hurt by them, but this one might hit some of them the wrong way. I mean, yes, there are some notable differences in the playing styles from track to track, but if you're just casually listening to the album, as I was the first time I put it on, you'll press play and think to yourself, "How long was this track again," only to see that you're on track four of the album. In some ways I guess that could almost be seen as a benefit because when that did happen to me, the only real thing that guided me through was the atmosphere that each track created. I was not listening actively to what the guitars were doing, but the ambiance and background drones that drifted gracefully from ambitiously uplifting to calmingly melancholic.
In the end I guess the best I can say about this album is that it sets out exactly what it means to do, and that's an achievement into and of itself. It's not overly ambitious or groundbreaking, but each track sets a mood, whether that mood happens to be uplifting or melancholic, and paint portraits of a setting for the listener. Fans of the aforementioned folk, ambient, and drone genres will undoubtedly enjoy this, but if you dig more psychedelic music as well, you'll probably get a nice kick out of it as well.
Overall Score: 8
Highlights: Fort Lonesome, FL, Sacred Heart, OK
Posted by maskofgojira at 5:34 AM