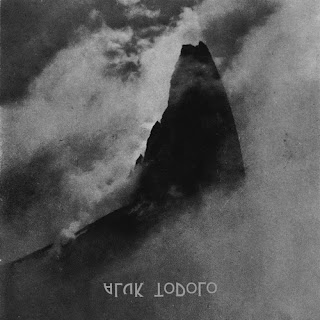 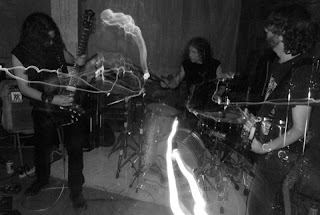 I first found out about Aluk Todolo some time just over a year ago and have been a fan ever since I heard them. Their unique blend of black metal and psychedelic rock, among others, really blew my mind (and I'm sure many others). I really enjoyed their collaboration with Der Blutharsch and The Infinite Church of The Leading Hand last year and that only added to my anticipation of this album.
In the past, while they've certainly taken plenty of influence from doom and black metal, I can't say that the trio of Aluk Todolo had ever really performed it. I don't think I could say that it's ever been a problem, there are plenty of other bands that fuse black metal with psychedelic rock, and Aluk Todolo had a nice take on that by making use of almost no metallic elements at all. That has now been rectified for this album. The opening two tracks on here, Occult Rock I and II respectively, take a much more active black metal element, as tremolo picked guitar lines and blasting drums (not blast-beating in case you were wondering), and translate it into their sound. In the past, the most "metal" I had felt the trio had gone was resigning waves of distortion to create a black metal-esque atmosphere, but there were several sections in these tunes where a person could clearly headbang to what the band were playing. It easily some of the most intense and aggressive material the band have written together, though somehow that in itself is somewhat unsurprising given the members tenure in long running black metal outfit Diamatregon. While the rest of the album treads more familiar, and perhaps less intense, territory, it's all a joy to listen to.
As always, groove is a given when listening to the band. No matter how experimental and psychedelic the band are, the bass and drums just maintain a groove that moves and propels the song forward while never feeling dull or monotonous, and that's saying something considering how long they wind up holding onto some of these grooves. Whether the band are just rocking out like on the closer of III or getting lost in a groove on , they know how to get your attention and keep it for the duration of their songs, which, with the exception of one track, all happen to be around the ten minute mark. With that being said, experimentation is always happening on each and every track, whether the band start out blasting and mutate into a heavily atmospheric groove piece, opener I, or gradually building up from an eerie groove into a huge metallic climax before breaking it back down and rebuilding again on another, ala Godspeed You! Black Emperor style, on IV. It's even possible to say that the incredibly barren style of VI is new ground for the band, and, in my opinion, is actually the most alienating track on the entire album. With entire sections of the track being only bass and drums and the guitar being absent. It builds this tension that I found quite clammy and almost stressful before a burst of noise was used to reintroduce guitars into the track. To mention only three tracks (out of eight) seems a bit like I'm shortchanging you, but hopefully someone will find this interesting and check this album out and discover all its intricacies and ideas for themselves. Every track is a gem in its own right and it's great to hear a band try something a little bit different on each track while making it sound consistent and flow as an entire album.
It's a very admirable and unique piece of work that stands up alongside the best releases of the year. As a double-album, I did feel like it was a little too long at times, which is weird considering this just tops eighty-five minutes (so it's not that long), and proved to be a bit too much to take in a single sitting, but that might just be me. It's definitely worth your time if you enjoy psychedelic music, jam rock, or more experimental forms of black or doom metal.
Overall Score: 9
Highlights: Occult Rock II, Occult Rock IV, Occult Rock VII
Posted by maskofgojira at 4:01 PM