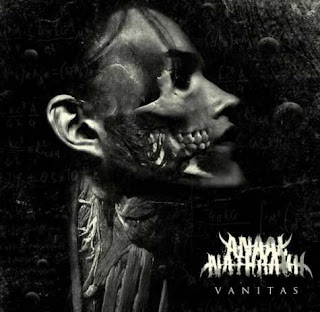 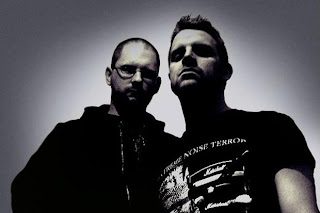 I remember it took me so long to get into Anaal Nathrakh because I just didn't get what they were doing. Their early albums just had covers that made me think it was so violent and extreme I didn't even want to hear it. It wasn't until I heard, I think, In The Constellation of The Black Widow that I thought, "Wow, this is a really good band."
I have to say, the first two tracks that were released from this album, Forging Towards The Sunset and Of Fire, And Fucking Pigs, I was not huge on. They weren't bad songs, but they didn't really do anything for me, they didn't do anything I haven't heard the duo do on previous albums before. The former was one of their standard melodic tracks with a big chorus and the latter was intense and raging from start to finish. I was actually a little worried about how the rest of the album would turn out because I didn't think those songs were all that great. Luckily, the rest of the album is better. This is an album of blatant rage and force, no relenting at any point. Last year's Passion felt like a more black metal sounding album and featured what I felt was a more atmospheric sound; and this album continues in a similar vein, in the sense that it's more black metal than grind or crust influenced. It feels less reliant on atmosphere and returns to the more brute force and intense speed of earlier albums to an extent that it sort of feels like a natural successor to 2006's Eschaton album. The likes of opener The Blood-Dimmed Tide or Feeding The Beast bring that sense of total self-annihilation that I've come to expect from the project while always presenting it in a song form. The use of electronics feels far more apparent on this album as well, with various electronic and industrial beats popping up throughout various tracks and giving them a more tense and almost schizophrenic kind of vibe at certain times.
Personally, I've always found V.I.T.R.I.O.L. (Dave Hunt) to be a hugely underrated vocalist. He has one of the best ranges in extreme metal in my opinion, bouncing between torturous, throat-shredding screams, guttural death growls, and operatic clean singing with ease. On the last few albums from the band, Hunt's style has typically followed suit with the songs that Irrumator (Mick Kinney) has written, and has thus delivered more melodic performances, delivering perhaps a more accessible (though I highly doubt it was purposefully) sort of album with more focus on catchy choruses. I've always found it both entertaining and slightly shocking whenever I hear Hunt bust out into a absolutely insane scream like the one he does in In Coelo Quies, Tout Finis Ici Bas, and yet he still had the ability to sing/scream/growl after doing that. Then there's Kinney's production. Personally, I felt like on Passion, Kinney had made the album a bit too clean and polished, for my liking anyway, but on here, he returns to that clean, but very noisy sound of an album like In The Constellation of The Black Widow, where it's very clear and easy to listen to, but very chaotic and natural sounding. Also, before I forget, I should mention that this album sounds HUGE.
It's a very good album, though it isn't my favorite record, it is another notch in the band's already stellar discography. I like the fact that it doesn't rely as much on clean vocals to drive it's point across and focuses more on ferocity and intensity to get the job done. I think that whether you're an older listener or a newbie to the band, this would be a great place to start.
Overall Score: 8.5
Highlights: To Spite The Face, Todos Somos Humanos, You Can't Save Me, So Stop Fucking Trying
Posted by maskofgojira at 1:57 PM