I'm very bad at keeping up with release dates. I really try to put things out in a timely manner, but this year (what with me trying to actually give albums more time and attention) it's been harder to keep up with them. I got these a few months back and I just sat down recently and told myself that I was going to do a special review just for these albums. All reviewed from 1-10.

Back in 2010, I reviewed Gates' debut album The Moths Have Eaten The Core and was pretty favorable towards it if memory serves, though I didn't really have much frame of reference beyond Sunn 0))) at that time. Though I haven't covered any of the band's subsequent material, I was slightly intrigued to hear where they would go on here, since their last few releases have been pretty much more of the same in my opinion. This album was a lot more brutal than I ever would have imagined it being. To me, it had a bit more of a black metal edge that would explode into bursts of noise and ambiance while the guitars just spiraled into oblivion. Bryan Bray has obviously been listening to some of what Sutekh Hexen has been doing because there are similarities in the sound and ideas of this album and what that band have been doing, though this is not quite as blatantly metal as Sutekh Hexen are. While opener Glimpse of Overlapping Dimensions was the most aggressive track on here, and my personal favorite track, the two following tracks take a more ambient, but still very noisy, approach. I think it's a fine piece of work and it's my favorite material from the project to date.
Overall Score: 8.5
Highlights: Glimpse of Overlapping Dimensions 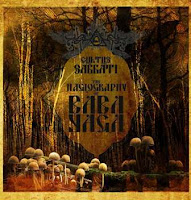 I remember reading about Cultus Sabbati within the last year or so and being somewhat intrigued by them. The whole anonymous members and experimental drone idea did pique my interest, but I never really got around to listening to them until I got this new album. I knew from various descriptions I had read around the interwebs that had described the band as one that fused black metal, drone, ambient, and power electronics together into some otherworldly concoction. The end result is a pretty tense sounding escalation. Though quite brooding and restrained for the majority of it's playing time, the track does dance between ritualistic, more tribal to be specific, percussive patterns and bursts of harsh distortion and noise. Personally, I felt that the first half of this album was more engaging because it felt like the entire thing was on a steady incline, gradually increasing in brutality and harshness as it went on, the second half felt more like a consistent rush of sonic aggression that certainly had it's ups and downs, especially in it's last third, but were much less interesting. Make no mistake, it's not a bad album, far from it actually, but the second half is a bit disappointing based on what the first half demonstrated.
Overall Score: 7
Highlights: Never Turn Your Back to The Forest/In My Shadow Widows Scream

Now, obviously I can't speak for other people but Thisquietarmy is a project most well known to me through Eric Quach's more post-rock based releases. As of recently, I've been finding more and more of his albums drifting into the ambient/drone style. Of the three releases in this list, this one is obviously the softest and most tranquil, there are no huge bursts of noise, though there are several uses of distortion throughout, and there isn't a metal vibe that appears at any point during these tracks; and in a way, I think that's what makes it such a calming piece. Even when it gets loud with the distortion, it never feels quite as abrasive or ear-piercing as it could be (and thank goodness for that). While the first half of the tape is quite up and down, the second half is far more of a steady and slow incline, in the sense that you don't get a whole lot of variation and the track just gradually builds while never diverging away from that more ambient state of mind. Sure, there are a couple of post-rock or almost trip-hop inflected moments that pop up here and there, but I wouldn't tell someone coming into this to expect any of that. It's another solid release for Quach and I think if you're a fan it's definitely worth picking up.
Overall Score: 7.5
Highlights: Phantom Pain
Posted by maskofgojira at 1:43 PM