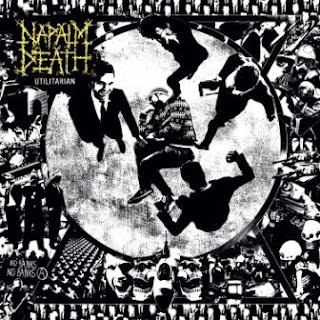 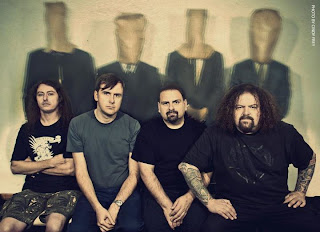 Band: Napalm Death
Country: Birmingham, UK
Style: Grindcore
Label: Century Media
Yes, I'm covering Napalm Death and yes this review is late (as will be a couple of other albums). Of course I'm a Napalm Death fan, I think you kind of have to be to enjoy grindcore (I could be wrong), but that's how I've always seen it. After two really great previous albums I was certainly interested in hearing if these boys could keep up their trackrecord.
I can't say I've listened to every Napalm Death record they've ever released, despite calling myself a fan, but over the years I've certainly listened to various tracks from each full-length. I don't know if you could call me a true fan since I can't say I've listened to every single one of their releases as of yet, but in preparation for writing this I think I listened to more Napalm Death in a couple weeks than I've listened to in previous years. So, in terms of this, the band's fifteenth album (I believe), the real question is what have the band done to set this one apart from the others. Well, to put it simply, to say this one is a huge difference would be grossly incorrect and inaccurate, seeing as the band really haven't changed all that much since the early 2000s. Call it a refinement more than an evolution.
Like I mentioned in the intro, the last two full-lengths records, Smear Campaign and Time Waits For No Slave, I thought were both really solid records that had great songs and were simply pummeling. Sonically, this album doesn't distant the band from the core sound you heard on those albums and the hanfull they've released since the beginning of the 2000s. Having said that, it's not like each album doesn't have at least a few standout moments on it that make it stand apart from the rest and on here you have the likes of Everyday Pox or The Wolf I Feed. While Everyday Pox really isn't all that different from any other song on this or the band's previous releases, the guest saxophone solos provided by John Zorn bring back memories of Naked City. The Wolf I Feed on the other hand is strangely melodic and industrial, with clean vocals (I believe that Mitch Harris did them) that recall the likes of early Fear Factory. But I have to say that even when the band are simply pumping out more grindcore, or deathgrind, songs, they still pull it off with more conviction and energy than many of their contemporaries. They manage to provide that sense of fire and momentum that even newer bands can't manage to muster up (which is as much a mystery to me as it probably is to you). Personally, give me Napalm Death doing nothing original but still writing badass grind songs for the rest of their days over boring and unenthusiastic newbes who try and be all spastic and weird for no reason any day.
It's not a masterpiece and it's not going to be an album that's going to change the world, but it's another solid album from grindcore masters Napalm Death. The whole thing may not be as entirely memorable as Smear Campaign was (to me at least), but this has more than enough really good songs to keep it in rotation for a while. It's a good time record to put on when you want to mosh and have fun, enjoy it for what it is.
Overall Score: 8
Highlights: Everyday Pox, Collision Course, Think Tank Trials, Analysis Paralysis
Posted by maskofgojira at 10:56 PM