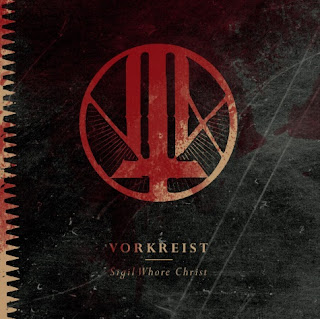 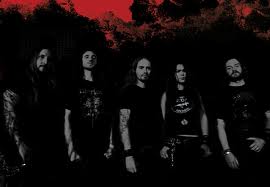 I'm pretty sure that I've mentioned in the past that I've never been one for black and death metal hybrid bands. Personally, I find that separately, the bands are a lot more interesting, but the fusion of the two always leaves me wanting more, and a lot of the band's I've heard doing this sort of hybrid sound have a lot to be desired in terms of dynamics as well. But with my love of a band like Blacklodge came me learning about Vorkreist and finding a band that could actually pull off the fusion of the two genres.
I have to say that if you're going to use movie quotes in your music, especially to open up your album, it's best to use a movie that is not only amazing, but also a section of the movie that is memorable, and that's something that Vorkreist do to open up this album. I applaud them for not only using a portion of The Last Temptation of Christ, but using a section that has Willem Dafoe in it, inherently giving that intro a much more eerie vibe to it. But onto the music itself. Like I said above, I'm not usually one that's all that into the fusion of black and death metal, but then again, a lot of band's I've heard do the fusion never strike any sort of interesting balance between the two. Being brutal is all well and good, but songwriting and catchy riffs should still have a place in the blend, and for crying out loud, I have heard very few bands come close to the memorability of tracks like Maledicte or Dominus Illuminatio Mea. But to be honest, most of these tracks wind up being top-tier level songs that far exceeded what I had expected from the band.
Like I just mentioned above, the use of good riffing is hard to find in bands that try to fuse death and black metal together, for one reason or another, I don't know why a lot of the band's just can't put two and two together, and it's always great to find bands that know how to put together a memorable track. Aside from the two obvious genres I've mentioned throughout, it's also good to hear an embrace of the likes of thrash and sludge in here as well, which add the necessary variety to this album to give the faster songs that jolt of adrenaline need to propel them ahead of the pack on here, while giving the slower songs more weight and atmosphere. When I say atmosphere, don't expect some dense backdrop though, I'm not referring to the kind that sticks out obviously when you're listening to a black metal record, the atmospheres on here are the sort that creep up on you when the band is making more use of their dissonant and slower side, hear Memento Mori for an example. Like the sample used to introduce the album to us, the atmospheres are more eerie and chilling than overpowering or intense. Of course, I then have to mention the epic of the album, Scalae Gemoniae, which has no build up to its ambiance at all, and just bursts out of the gate with a haunting backdrop. While it probably isn't that great a surprise that I happen to like longer tracks, when it comes to longer death metal songs, it can be hit-or-miss with me; but of course this was a hit.
I'm seriously not kidding when I say I want more albums like this. There needs to be more bands who know how to write interesting songs that are still catchy as all hell out there, this cannot be the only one out there. If you like extreme metal bands who can actually write riffs, than do not ignore this band. More people need to hear this band and more bands need to know who to look to for influences. I wish I had more to say, but I guess the last thing I really can say is that you need to hear this album.
Overall Score: 9
Highlights: Deus Vult, Memento Mori, Scalae Gemoniae
Posted by maskofgojira at 10:43 PM