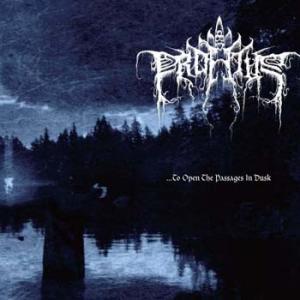 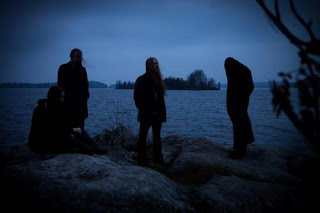 From the couple of funeral doom releases I've covered/listened to this year, the genre is proving to come back to some form of relevance as of late. With numerous bands either getting better at what they do or newer groups putting out records that are challenging the stereotypes of the genre, thus far, the genre's had a pretty good year thus far. It's probably a bit late in the game at this point, but here's Profetus' take on the genre.
While crushing and mournful mood is nothing new for the funeral doom genre, or doom metal in general, there really hasn't been that many bands that have expanded upon those moods very much. Sure, we get that you're sad, but you know what, there are about a dozen other bands that are in pretty much the exact same boat as you. This year has produced some really good funeral doom records thus far, and Profetus is the latest to join that list because they build upon ideas that the likes of Skepticism have been perfecting for the last decade by bringing synth all the way up in the mix as a prominent instrument and allow the atmosphere to build from long and extended droning passages. Though the sounds used are symphonic in nature, but are by no means overpowering or cheesy, steadily gliding along with the guitars, creating a very cold and chilling atmosphere. I will admit that this is very much a mood based album, at least for me it is anyway, because throughout various listens, there were times when songs did feel a bit too extended in length, but when you're in the mood for funeral doom, I have to say that this album really hits the spot.
For all the funeral doom out there in the world today, I think there should be one question that really separates a good album from a bad one. Is there anything memorable about the album at all? Whether it's a mood or a feeling that the album leaves on you when you're done listening to it, or a melody that sticks with you from a certain song or songs, in my opinion, a good funeral doom record and/or band should evoke something that makes you want to listen to them again. Like I said above, this year has, thus far, delivered some great slow paced albums, and Profetus deliver in a much different way than others have, for myself anyway. This is the first funeral doom album in a while that has had riffs that have stuck with me for longer than the length of a song. Sure, I'm not going to go out and say that this is going to be the catchiest funeral doom album of all time (which is really more of a personal issue) but it's one of the very few I've heard in a very, very long time that has stuck with me. The last few minutes of The Watchers Dusk is just haunting and stuck with me for days after listening to it and the section around the twelve minute mark of The Shoreless is epic. I guess I would have liked some more singing or growling, since most of the vocals on here are done in a low, spoken word fashion, but that's really a minor complaint on my end because the music is as powerful as it is.
I urge all fans of doom and all fans of slow music to give this album a chance. It's very rare that a doom metal album, once again, especially funeral doom, proves to be as ear-grabbing and memorable as this one is. This has not received as much acclaim as it has for nothing. Definitely check this album out.
Overall Score: 8.5
Highlights: The Watchers Dusk, Burn, Lanterns of Eve
Posted by maskofgojira at 8:05 PM