The Boats - Ballads of The Research Department (2012) 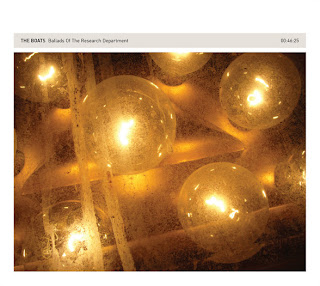 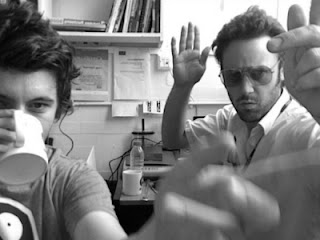 I have to say that before checking out this album, I had never heard of The Boats before, so this was a new experience for me. The whole folktronica sub-genre is one that I can't say I've heard too much about, or from, besides The Books, and I knew that even before listening to this that this would sound much different than The Books. But, I was intrigued enough by the premise of what I saw from this album to want to check it out.
Obviously, by the name itself, folktronica is obviously a mixture of folk music and electronic music, but that's still pretty open to interpretation. While folk music is pretty easy to wrap your head around, while there are numerous ways of approaching it, most people can at least gather an assumption to what folk music is going to sound like before they hear it. Electronic music is far less defined, and so when I was coming into this I really wasn't sure if what I was going to hear was going to be more in the vein of techno music, house music, dubstep (God-forbid that), or even glitch or industrial music. Luckily, this happened to fuse folk music with I guess could be seen as trip-hop and ambient music. But I guess a better way of describing this album would be to say it's an ambient album with traces of trip-hop and folk music. I really was not expecting this album to be as ambient as it was when I first decided to check it out. I mean, there are parts where acoustic guitar, cello, violin, and piano come out and are easily heard, and the same can be applied to the electronic beats as well, but for the greater majority of this album, you're going to be listening to washes of bright ambiance.
The four tracks on here range in the amount of folk/electronic presence. I would call this an ambient album above all else, but each track really does stand apart from the others around it. So you have opener The Ballad For Achievement which is by far the most ambient piece on the album, and is probably the most relaxing of the four on here. The Ballad of Failure on the other hand features a much larger folk presence, with acoustic guitar plucks and whispered vocals that guide the song through its first half before it descends into the album's noisiest moment. The Ballad For The Girl On The Moon is probably the most "electronic"-based piece on the whole album, and is where the beats really stand out the most. Closer, The Ballad of Indecision, is a piano led piece that really reminds me of Ólafur Arnalds' work, which I happen to love, which makes use of a minimal piano arrangement with melancholic strings providing the majority of the movement and shifts within the piece. Each track happens to be just different enough to make each stand alone while allowing each to flow into each other and making the album feel and sound cohesive. The last two tracks especially flow together as a single piece, more so than the first half of the album, which is maybe why I prefer the second half to the first on here.
I really enjoyed this album and found it to be rather engaging for how quiet and peaceful it is. I know that ambient based folk and electronic music isn't going to be everyone's cup of tea, but I didn't think it'd be mine and I wound up really liking this. The Boats really made an impression on me with this album and I look forward to going into their back-catalog and seeing how the band moved towards this album.
Overall Score: 8.5
Highlights: The Ballad For The Girl On The Moon, The Ballad of Indecision
Posted by maskofgojira at 12:07 AM