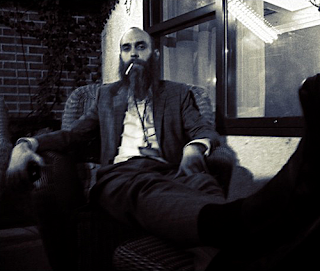 I'm not going to hide the fact that I love my heavy music, which should be obvious for anyone who's just browsed through this site, but it's nice to check out other styles as well. I'm all in favor of musical exploration, and if I ever find myself bored, I'll skim through various musical databases to see if there's anything un-metal that's looks interesting. That is how I found Saltillo, which aside from a cool looking cover, sonically was something I really haven't covered before.
The fusion of industrial and trip-hop styles with more orchestral based arrangement really sounded interesting to me. Personally, I've always liked darker and more melancholic sounding string arrangements, so this album naturally appealed to me right away because they are used to create mood as well as melody on here. Menton J. Matthews III is definitely a very skilled arranger/composer as each track on here really manages to evoke a different kind of vibe, while the entire album maintains a pretty consistent atmosphere through it. In order to contrast that, the beats used on here are very mechanical and robotic sounding, which is very much in the vein of industrial music more than trip-hop. The clashing of the more morose arrangements with the mechanical beats might be a bit jarring for some, but proves to actually be a melding of ideas that works out more than it fails. Sure, you'll get some obligatory turn-table-ish stuff and softer beats on They All Do It The Same for people who want a bit more of trip-hop kind of vibe, but you won't find a whole lot on the rest of the album that presents that kind of approach again.
While this is by no means a mainstream sort of album, there are a few tracks on here that do stand out, at least to me, because of the vocals that are present on them. Tracks like the stellar If Wishes Were Catholics evokes a great atmosphere that recalls a bit of the style that Michelle Richfield brought to the first Antimatter album while Veil is a bit more of a somber track that might get lost in the shuffle if you're not paying attention because it is in the later stages of the album. It's not as memorable a track as the former one I mentioned, but is a lot more propulsive due to the heavier beats used on it. Most of the other tracks are divided between being instrumental pieces and using samples that definitely thought provoking, which is more than I can say about a lot of other artists. It's a very cold album that from what I read was supposed to accompany a comic, which would be quite an interesting thing to read in unison with this album I should say. Tracks like Gatekeepers and I Hate You are two of the tracks which feature samples that happened to stick out to me, with samples that were really grabbing and managed to convey a dark and almost chilling nature to those tracks. The samples are dark enough that you could either take them as being straight-faced and serious, in which case they are actually quite chilling, or more sarcastic, which, personally, I think would still make them interesting to listen to.
I think that, overall, it's a solid enough album that is more than likely going to appeal to people who enjoy a darker atmosphere to their music while still being able to engage with it. It's not perfect, there were a handful of tracks that I wasn't particularly fond of, but the majority of it is well put together and arranged. If you're a fan of modern classical music or more moody forms of electronic music, I'd say to give this album a shot.
Overall Score: 7.5
Highlights: If Wishes Were Catholics, Gatekeepers, Forced Vision
Posted by maskofgojira at 8:37 PM