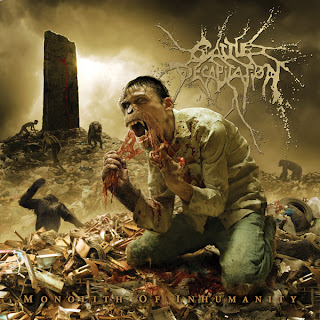 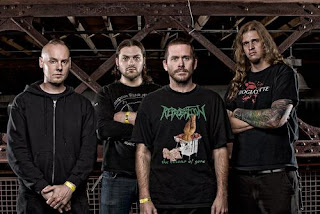 I'll admit that I've never been a huge fan of Cattle Decapitation in the past. Not to say I certainly wasn't aware of them, anyone with an interest in disgusting album covers, like I do, was certainly bound to cross paths with the band at some point. It wasn't until The Harvest Floor was released that I can say that I became interested in the band, so after hearing a few tracks from this album I was certainly awaiting to see where the band would take their sound next.
I think I've mentioned it before that I'm a sucker for any band that attempts to rip-off or has owes any sort of debt to Carcass. I love original and unique groups but the sound of Carcass, or a Carcass clone is something that just gets me every time. Having said that, it's obviously been a long while since Cattle Decapitation has sounded like Carcass. It's at the point where the band has become something far more original and it's hard to even tell that they were a clone band at one point in their career. So, here we have the band's fifth full-length and it's following up what many consider to be their masterpiece (personally I still enjoy Karma. Bloody. Karma. more, but that's just me), but when it comes to this album though, I can honestly say that I feel it's the band's best, but it surpasses any and all expectations I had for the album.
The entire band has really outdone themselves on here, vocally and instrumentally. Even on The Harvest Floor I didn't find the band this catchy and there were some songs on that album that I found to be forgettable, but on here there's something that keeps me returning to each song. To me, this album finds the band bringing forth not only some of their most brutal and heavy material but also some of their most melodic. Tracks like Forced Gender Reassignment and Projectile Ovulation are absolutely crushing and have some of the band's most intense moments (I'd say in their entire career) within; but then you have tracks like A Living, Breathing Piece of Defecating Meat or Lifestalker which have Travis Ryan embracing more melodic moments with some of his cleanest vocals yet (though they're still not being sung). At least to me, it sounds like Ryan is making use of his lower and more guttural growls, which I've always been more partial to, on here than his higher screams, which might seem like a mistake to some, but I think has actually increased the variety in his vocal assortment because he's brought back those toilet bowl gurgles that the band haven't used too much on the last couple of releases. Meanwhile Josh Elmore pumps out some of his best riffs to date on songs like the aforementioned Projectile Ovulation, which throw elements of death, thrash, and black metal into a whirling grindcore blender. The end product in more than I ever expected.
What I've come to appreciate about Cattle Decapitation is that despite their roots in the whole goregrind and brutal death metal scenes is that in recent years they've gotten away from all out assaults. They've realized the power that a good riff or song can have on a listener and have really developed that on the last few albums. I really don't think that the band could have released songs like Lifestalker or Your Disposal back when they first started putting out full-lengths. Melody has become an integral part of the band's more recent sound, perhaps just as much as brutality. To an extent you could even say atmosphere has become a bigger and more integral part as well, with The Monolith really standing out as an interesting prelude to Kingdom of Tyrants, as a very dark and moody piece that from my perspective builds off of what they did on the title-track of their last album.
Like I said, I'm really impressed with this album and it has to be my favorite thing the band has ever released. Now I can finally appreciate that whole "Gore Not Core" logo I've seen on t-shirts, and it's definitely a reason to always give something a chance. I hope that even if you're not a huge Cattle Decapitation fan that you'll check this out because it is really good.
Overall Score: 8.5
Highlights: Forced Gender Reassignment, Lifestalker, Do Not Resuscitate
Posted by maskofgojira at 5:30 PM