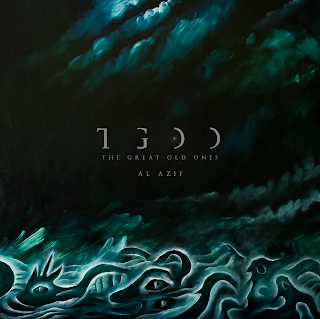 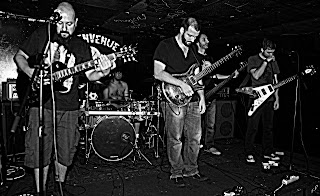 There was quite an interesting reaction last year when The Great Old Ones released their first EP on Bandcamp. The whole Lovecraftian subject matter has been covered quite extensively throughout the history of metal so for a band like this to receive such acclaim from it really did create quite a stir throughout the interwebs. It's nice to see that a band get signed and produce new material so quickly after an initial release.
With all the bands and projects that constantly reference the work of Lovecraft (not to mention various films and books), very few manage to ever come close to the majesty that his stories inspire. Not to say that there haven't been groups who've done justice to his work, but those who do achieve anything worthy of merit are sorely unappreciated by the greater majority of fans who have probably been brought up on references made by the likes of Metallica or Cradle of Filth. So, it's with great pleasure that a group has emerged that can actually bring a new light to his stories and make, at least me, feel like Lovecraft's work hasn't been totally disgraced by the metal genre.
But onto the sound of the band, which is, for all its varying degrees of depth, can and most likely will be placed into the whole post-black metal movement. There is a definitive post-rock influence within the band, but I'd be more likely to place them alongside groups like Altar of Plagues, Fen, and Lantlôs than among the hordes of followers and copycats who, while they may be enjoyable and good bands, ultimately don't bring any new ideas to the table or have an original sound. Like the three groups I just mentioned, TGOO have a sound that is recognizable from others within their scene and one that, while it doesn't stray too far from what a lot of bands are doing within the sub-genre right now, is still unique enough to set them apart from others. The post-rock sound feels more than just another group copying and pasting together black metal parts and shoegaze/post-rock parts, or having someone scream over post-rock, it's a more natural fusion of the two sounds. Tracks ebb and flow between more intense moments of black metal blasting and softer post-rock ambient soundscapes, often joining the two together as oppose to keeping them separate.
Despite all of that, each track does have its own trait that manages to set it apart from the rest. Being that there are only six tracks, all of them quite lengthy, the ideas present in each track are ultimately quite minimal despite how much the band pull off. While no track abandons the main ideas or sounds the band works with, hence minimal, each song expands upon them in a different way, allowing each one to shine through. Whether it's the more tried and true post-black metal sound of Visions of R'lyeh or the far more progressive and adventurous sounds explored on Rue d'Auseil, you'll find a unique experience within each track. With all that being said though, this album is most definitely a grower. Despite how I used the term minimal in relation to the ideas and sound, each track is filled with layers and textures of ambiance and guitars that are not going to be revealed within a couple of listens. Probably the one track that managed to stand out to me from first listen though was closer My Love For The Stars (Cthulhu Fhtagn) which was the one track that hit me immediately as being memorable. Something about the riffs in that song and the way it's arranged really stood out, to me at least, and made it sort of the defining track on the album for me.
Though I didn't enjoy this immensely when I first listened to it, like I said, it grows on you, and as you can probably tell by now, it definitely grew on me. Please give this album some time to grow, even if you're not big into it on the first listen, give it the time it so rightfully deserves to grow on you. I can only hope you enjoy this album as much as I have.
Overall Score: 9
Highlights: Jonas, My Love For The Stars (Cthulhu Fhtagn)
Posted by maskofgojira at 11:50 PM