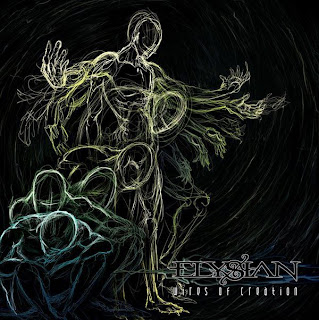 You know, I really wish that I was more into the whole melodic death metal genre than I have been the last couple of years. Beyond the first couple of months of last year, I don't think I covered too much, if any, other melo-death albums last year, which should give an indication of both, how much I care for the genre, and how much I found interesting in the genre last year. This little independent album has been getting quite a bit of good press recently, and caught my attention before I read any of the press anyway, but of course I need to chime in with my thoughts.
In my opinion, it's so hard to find a good, modern, band doing melodic death metal well. Sure, groups like Dark Tranquillity, Amon Amarth, and Hypocrisy are keeping it alive and fresh with every new album, though I can't say I'm all that much a fan of Amon Amarth, there haven't been that many newer groups who I appreciate as doing anything interesting with the genre. Though that's not to say that there aren't any out there. Elysian prove with this debut full-length that they are one of the few groups nowadays who actually play melodic death metal in a way that doesn't just sound like a metalcore band with keyboards, but like a band who are very conscious of using guitars to create melodies, which I have to say I have found sorely lacking in many newer so-called melodic death metal groups. The guitars manage to provide melodies as well as riffs, which is something I've noticed guitarists getting away from within the genre for some reason. On a side note, I also feel that since it could be a deal breaker for some people, though I thought it was a good move, there are no clean vocals on here, or rather, nothing is obviously sung. There are a couple of background vocals, and I mean background, not back-up, that are chanted.
With all that being said, Elysian stand out not only because of all the above, but also because they are somewhat progressive as well. There are plenty of moments on this album where I can heard traces of bands like Meshuggah and Extol, though I wouldn't say it's limited to those. The whole progressive element is one that isn't super strong on here, despite being there, it's to the degree where even if you totally disliked prog-metal, of any kind, but liked melo-death, or bands that made use of strong melodies, you could still get into this album. I mean, in the longer tracks like The Climb From Fear or A Cry From The Hopeless, you're obviously going to hear it a lot more than in the shorter tracks, though the entire record is not exclusively like that, but like I said, it doesn't hold a huge presence in the band, and they don't push it in your face either. The use of cleaner guitar solos during the aforementioned The Climb From Fear or the more tribal drumming during the opening of Play The Hand may be small pieces when you look at the album as a whole, but those small bits in individual songs manage to boost this album up from being simply a melo-death album.
Personally, I think this is the first real good melodic death metal album of this year and it has surpassed even my expectations for it. I think that this is a great debut that is definitely worthy of all the good press it's gotten, and will hopefully continue to get. I think that if you're a fan of good melodic death metal that makes use of both melodies and riffs, and maybe even if you dig a little progressive influence as well, you will find this a very enjoyable album.
Overall Score: 8.5
Highlights: The Climb From Fear, Sense Offender, Conquest
Posted by maskofgojira at 12:00 AM