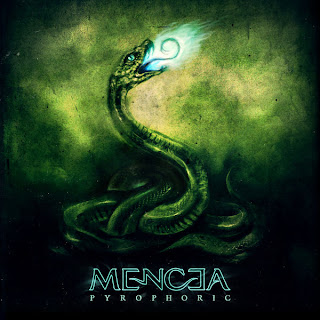 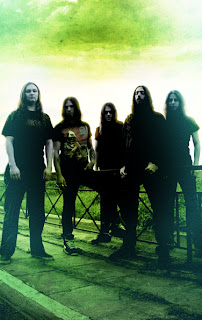 When I first hear Mencea, they were getting lumped in with the whole djent scene, at which time I was probably even more into than I am now, and decided to check them out. It seemed strange that they were signed to a label like Indie Recordings that was known for signing more "progressive" black metal and rock groups, but after listening it is easy to see why they stood out. Even on their debut, it was hard to really call Mencea a djent band, but I wasn't sure how they had evolved after four years.
I have to say that with all the good will in the world that while Mencea's debut full-length, 2008's Dark Matter Energy Noir, was a nice change of pace when it comes to Meshuggah influenced bands, I didn't find the record to be all that interesting. Luckily enough, the line-up change that occurred in the band has really re-energized the band cause this record just rips from the get-go. The debut was fine, don't get me wrong, it wasn't a bad album, but very dull, I found that it was in one ear and out the other, with nothing all that interesting going on, but on here, the band really strike a good mix at the Meshuggah grooves mixed with more modern melodic death metal. Personally, I like the shift, vocally, that the band have taken on here. No longer are mid-range screams the dominant style, but lower and more powerful growls, which really do fit the band's style a lot more.
I feel the need to discuss the djent tag attached to this band because, at least to me, there's quite a difference between this band and many groups that have that tag lumped onto them. Where many djent groups have very polished and clean sounding records that are very precise with the whole stop-start riffing patterns, Mencea have a much more natural sounding production that has more low-end crunch to it than mid-range punch. The grooves are also not as fast, favoring more mid-paced head-bobbing grooves over technical and overly staccato patterns. It may be the more melodic influences bleeding through that makes the more mid-paced songs work, but the band's use of melody really strikes an interesting chord with me because while I said above that the band had more of a modern melodic death metal vibe on here, it's probably not in the way many of you are thinking it is. This isn't modern in the sense that it relies on keyboards for melody and has guitars just chugging away, this is modern melo-death because it's a band obviously taking influence from the genre but applying it in a more interesting, and modern, day context, which is how I feel the term should be applied. A lot of the melodies on here actually remind me quite a bit of the Deftones to be frank with you, which is quite an interesting thing to hear, but I thought it was really cool.
Having said that, unlike their debut, this album, while melodic, is still very much a death metal album. While it doesn't rear its head all that often, there are moments on here where the band channel straight-up death metal within their percussive delivery, mid-way through Beheading is probably the clearest. and it totally works. In fact, I'd actually like to hear the band make use of pure death metal a little bit more on future releases to be honest, but what they have done on here most certainly works to their benefit.
I really enjoyed this album, a lot more than I expected to actually, and thought it was a really nice surprise. Definitely a band to not overlook if you're looking for bands that use melody in an interesting way, or bands that use interesting melodies, either or both, because these guys definitely have a unique perspective on the whole melo-death sound. It's great to see a band evolve into something unexpected, but most certainly welcome, and this is the result of a band evolving and growing into something great.
Overall Score: 8.5
Highlights: CCC, Beheading, Pyrophoric
Posted by maskofgojira at 11:52 PM