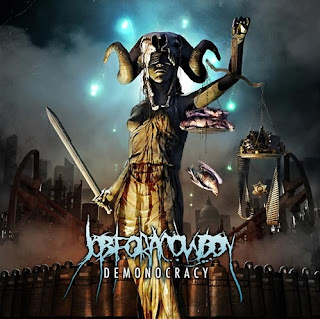 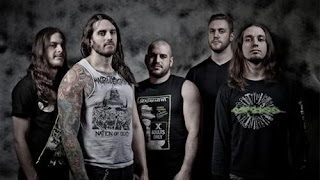 Despite what anyone might think about Job For A Cowboy, I've actually always enjoyed them. I've never been blown away by any of their releases but I enjoyed how they pretty much released what I guess could be considered a quintessential deathcore release and then moved onto straight ahead death metal. I don't really know what else to say, so here's the review.
I have to say that I still remember when JFAC was first starting to blow up and seeing a commercial for Genesis on tv that where it was paired with a Dimmu Borgir album. At that time, I still wasn't too into death metal, but I started to get interested in the band when they released a video for their song Altered From Catechization from that debut full-length. After I bought the album I remember listening to it on repeat for quite a while, I think it was probably one of the first "pure" death metal albums I had heard up to that point that I really enjoyed. Then Ruination came out and I was pretty underwhelmed by it and found a lot of the songs to be rather dull to me. It wasn't a bad album, but it didn't rival their debut in my opinion. Now we have this third full-length, which follows up last year's Gloom EP, which was rather solid, not great, but decent enough for me to still want to pay attention to the band.
I'll just come out and say that this album has some of the best songs JFAC has ever written on it. The musicianship on these songs is top-notch, and really moves them from being a more straight ahead, semi-technical, death metal band into a full-on tech-death band. The guitar is fast and precise while still bringing riffs that I can say with confidence are some of the best the band has ever written. Dare I say that these songs are also some of the band's most melodic as well. Jon Rice is a great drummer, and as if you needed any further proof of his skills, his work on opener Children of Deceit should show you why he's become as revered as he has. Personally, I've always thought Jonny Davy had a quite original sounding voice, when it comes to growling and screaming, and he had a solid range and managed to always keep you on your toes, and on here he's in top form as well. Personally, I've always preferred his lows to his highs, which at times are a bit grating, but like I just said, he uses a lot of variety throughout the record so neither style is completely overused. Nick Schendzielos is one of the reasons why this record also manages to top the band's previous albums as well, in my opinion at least. His playing style is all over this record, and really helps to keep these songs interesting ever after listening to them repeatedly, hear a track like Tongueless and Bound. His work in Cephalic Carnage was great, and he brings a similar sense of technical exuberance to these songs as well.
But like I mentioned above, this album features some of the band's best songs to date. In my opinion, Black Discharge is probably my favorite JFAC song to date, and it just has all the elements I want from a modern death metal band, it's fast, intense, and relentless while never losing sight of the power of the riff. Meanwhile you have tracks like the first single, Nourishment Through Bloodshed, and The Manipulation Stream that show the band using more melody than they ever have before. But, as it should go without saying at this point, the band has now gone fully tech-death. Like the title-track from their last full-length, the closer for this album, Tarnished Gluttony, is a slower track that is an appropriate way to end the album. While being super fast and technical is all well and good, I still enjoy that manages to mix things up, even if it's just one track on an album, it can make a world of difference, and this closer is one of my favorites from the album.
Top form tech-death and definitely the band's finest hour. I am actually a little surprised by how much I enjoyed this record seeing as I didn't come into it with the highest of expectations (though I didn't come in with the lowest either), but it's a welcome surprise for sure. Like I need to tell you to check this album out, but if you've been scared away by the deathcore tag that's stuck with the band since they first came out, this album will more than likely turn you into a fan and make you question that deathcore tag as well.
Overall Score: 9
Highlights: Imperium Wolves, Black Discharge, Tarnished Gluttony
Posted by maskofgojira at 7:09 PM