Meta-Stasis - When The Minds Departs From Flesh (2012) 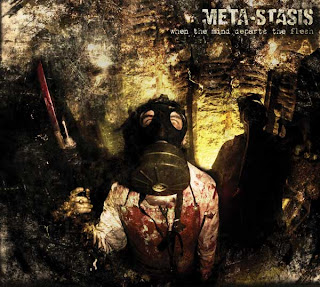 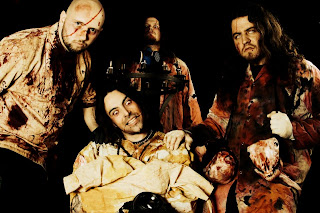 Back around 2007 I found a band called Ted Maul from the UK that really interested me at a time when I wasn't really into more brutal and chaotic forms of grindcore and death metal. Since finding their debut full-length White Label, I've been anxiously awaiting a follow-up but I have seen almost nothing regarding new material. When I found this band, I wasn't aware of any of the members involved, but because it was labeled as a progressive deathcore album (and thanks to my experience with Slice The Cake) I looked into the band and decided to give it a shot.
I have to say that since I don't currently know the status of Ted Maul, while I was listening to this album, I kind of viewed it as an extension of that band. Since half of this band is made of Ted Maul members, it's obviously going to sound a little bit like them but a lot of the ideas that were used in Ted Maul can be found on here as well. Both bands make use of technical and aggressive riffing while underpinning them with dark and dense atmospheres that bring a different sort of air to a "deathcore" group. Obviously since Solomon does vocals for both groups, he provides the clearest link between the two, and his style certainly recalls what he did on the Ted Maul full-length. He generally makes more prominent use of his low and guttural growls but still makes use of higher screams as well, nothing really unique in that regard, but what has set him apart is the use of effects that he chooses to use on his vocals, which appear to be everything from chorus to flangers and phasers, which certainly add to the variety of his vocals, hear a track like Space Occupying Lesion for instance. It's their presence that really makes him stand out, more so than he already does since to the choice of lows being his prominent vocal style, among the hundreds of other vocalists trying to gain any sort of notoriety.
Personally, while this album is solid, it ultimately feels like an album of ideas. A lot of the tracks are complete and finished, don't mistake this critique for talking about unfinished material, but a lot of the ideas either feel like I've heard done before, many times before, and ideas that sound like they were just sort of cut and pasted together into a song that just doesn't sound cohesive. Sure, Demon Barber Surgeon is a decent enough track, but it doesn't really do anything interesting besides give you a foundation for what the band are going to show you later. It feels overly simplistic and uninteresting in comparison with later tracks like Both Sides of The River or Misery Redefined where the band give a much better demonstration as to what they can do. Those songs are technical while still having riffs and making use of a bit of melody as well. While I do think that the dark ambient and industrial edge the band make use of on here does give them a definite edge in terms of standing out, it is by no means as jarring as the electronics used for Ted Maul, though they're probably not meant to anyway, they add more of a backdrop for the main instruments rather than playing any sort of integral role.
It's a solid enough debut release, but personally, beyond a handful of tracks, this album didn't do all that much for me. It's got a good range of ideas that will more than likely appeal to various crowds. I'd like to hear a further development and refinement of their sound in the future, but until then, I'll just have to take the good with the bad for this one.
Overall Score: 7
Highlights: Ways of The Wise, Both Sides of The River, We All Must Die
Posted by maskofgojira at 1:30 AM