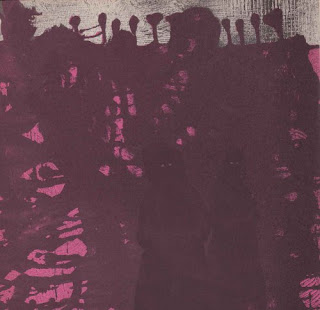 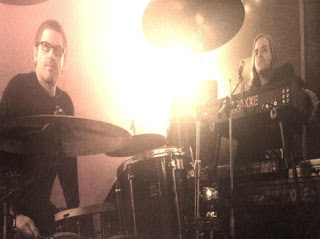 I have to say that aside from the rather ambiguous name, Pinkish Black is a band that is unlike any other I've heard (leave it to Handmade Birds to find and sign another band like that). I was really excited when I saw a video of them playing live, I don't usually read too much into live performances from bands to give me an indication of how a record's going to sound, but they just sounded great. So it's with great pleasure that I can now present you this album.
Of course, playing live is one thing, a studio record is a whole different beast all together. I'll just come out and say that the intense, metallic energy that the band had live has taken on a much different form for this record. Instead of full-volume noise, we have a band that channels the spirits of groups like The Birthday Party (I've taken that band from the press notes), but more strikingly Nick Cave styled post-punk and filtered it through a sort of krautrock kind of musicality. The duo channel the sort of dark and moody atmospheres, along with the vocal style and bass-lines from post-punk music, a couple of the bass-lines on here I actually think could work in a funk context to be honest, but it's put alongside the hypnotic and repetitive nature of psychedelic krautrock jams. Tracks like Passerby or Tell Her I'm Dead, which also channels some black metal into the mix as well, really hit that fusion on the head, perfectly nailing both sides of those genres to the point where it'd be near impossible to tell someone exactly what "style" they're listening to.
I was very taken by Jon Teague's drumming on here. He really brings that old-school krautrock sort of vibe to these songs by constantly maintaining a rhythmic pattern throughout a piece but adding more intensity, and obviously there are fills and breaks in there as well, to it as a track moves on. In the live video I watched when first hearing about this band, he was wearing a Magma shirt, to which I mentioned to someone (don't remember who) that that inherently made, not only him, but the band awesome. There are hints of Magma here and there, but they're more fleeting, and in his drumming I can really hear throwbacks to the likes of early Birth Control and Can, drumming wise anyway. The way he just jams out on a single groove throughout a track and just makes it sound so amazingly hypnotic and psychedelic is simply awe inspiring. But, to mention only him would be a disservice to what Daron Beck brings to the table. His synthe tones and vocals are what will draw people to this album. Like I mentioned above, his voice does recall the likes of Nick Cave, though I hear a bit of similarity between his voice and the guys from This Heat as well, while his synthe choices are far more varied.
It is perhaps the range of sounds that emanate from the synthe that allows this record to move across multiple genres so well. While the post-punk/krautrock idea I talked about above is the most common idea on here, as well as the two sonic traits that can be found on every track, this becomes far more interesting on its last three tracks. On those last handful of tracks, the band starts to throw in elements of black metal, mentioned above, doom, drone, and synthe rock, among others that really makes this album even harder to describe to people. I mean, you're not going to get average synthe-pop kind of sounds on here, except for maybe on Everything Went Dark, but that might be stretching what the definition of synthe-pop is. Sure, there's piano and organ, but there's also heavily distorted chords that you can feel in the jaw by how powerful they're hit, and the bass-lines provided actually sound better than a lot of modern post-punk throwback bands provide with a real bassist.
Overall, I really enjoyed this album, and with nary a flaw on it, it's rapidly becoming a personal favorite, getting constant rotation pretty much since I first started listening. It's a total blast to listen to and it's really hard to find an album that does that while being as odd as it is. Do not miss out on this album, for sure, one of the highlights of this year to be sure. Go and buy this now!
Overall Score: 9.5
Highlights: Every Track Is A Highlight
Posted by maskofgojira at 10:25 AM