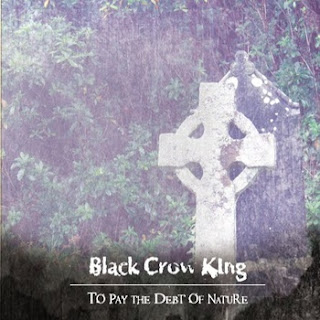 I'd like to think that I'm pretty good about reviewing stuff people send to me, I honestly try to get everything reviewed that people send to me but I do have to admit that timing isn't really my greatest strength. I've had this album for the last couple of months and had kind of forgotten about it until only recently. I did listen to it when I first got it, but with other stuff kind of coming along, this album kind of just fell to the wayside, but hopefully this will correct that.
When one thinks of doom metal a certain sound will come into one's head, obviously depending on certain tastes and sub-genre preferences, but a sound that is pretty overarching nonetheless. The slow, dark, and, a good portion of the time, atmospheric qualities are all traits that can be found in most bands no matter their sub-genre. When I put on this debut from Black Crow King, those traits are certainly visible within each track, but you'll notice right away that this is far from your standard doom metal album. While I'd put this album firmly within the doom metal camp, you'll find plenty of references to the likes of raw and lo-fi black metal, noise, post-rock, dark ambient, and drone as well within each of these six tracks. It's pretty disorienting stuff when you first listen to it. I have never heard anything quite like it before and I'm sure that not everyone will agree that that is a good thing. One thing that is most certainly going to piss off some people is the fact most of these tracks rarely stay on a singular course. I have no idea whether or not these songs were improvised, but there are segments that certainly come straight from the left field and are real head scratchers. The Shadow Falls manages to include psychedelic drone segments, odd keyboard and organ solos, and electronic percussion on top of a funeral doom foundation, and I'll tell you that this is probably one of the easier tracks to actually get into, but is still jarring as all hell. The whole album is full of enough ideas to put a band like Mr. Bungle (a personal favorite of mine) to shame.
Probably the hardest thing for me to overcome while listening to this album was the production. Because of how raw and lo-fi it is, it leads to a lot of this album kind of sounding like mud with the guitars often blending into each other, which may very well be the point for all I know. There's also no reason not to say that with everything going on within some of these tracks, the guitars often fall into the background while the noise or ambiances, or random sounds, take the majority of attention. In addition to that, a lot of the synth choices on here are quite odd, as I referenced above, with everything from organ and string samples to stuff you'd hear a B horror or sci-fi movie soundtrack. The choices are totally weird, and the production on them makes them sound eerie and bizarre. But if there's one thing on here that got my attention from the first listen on, and this is all subjective whether or not this is a complaint or not, but the mix is just all over the place. You'll hear sounds moving in and out of sonic portrait with guitars starting up front and winding up way in the back behind drones and more ambient ideas by the end of the track, Crowbait. It's something that's going to throw a lot of people for a loop. I actually can't wait to hear what more people think of this album actually. You'll understand why it took me so long to cover this thing when you finally do listen to it.
It's hard to really recommend this to anyone because it is so "out there" that there will be just as many people who will detest this as those who love it. It's the sort of album that a metal fan might hate but a drone and noise fan would love, or vice-versa, despite no one genre really taking the center stage on here. It's an odd album for sure and if you want an experience I definitely think you should check this out, but if you're not ready for long listening sessions or bouts with headaches, stay away.
Overall Score: 7.5
Highlights: The Shadow Falls, Excarnation Ritual
Posted by maskofgojira at 2:19 AM