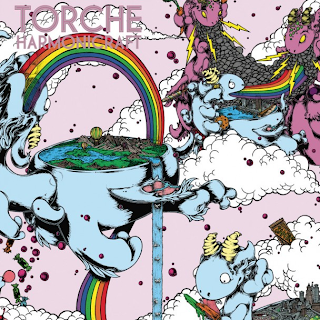 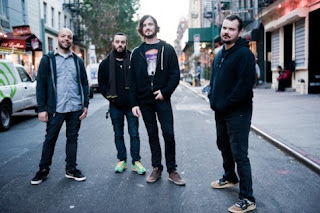 Anyone who's paid attention to sludge metal the last couple years will, and should, know of Torche. The band's unique take on sludge has helped to define what's been defined as sludge pop, which is a fitting title. The band is one of those groups that I was actually able to turn on some of my non-metal friends onto back in high-school.
Since this album was initially announced, there really hasn't been too much about it really surfacing (before the stream that is), which seems odd seeing as I've always thought that Torche were a pretty big band. Ever since Meanderthal was released back in 2008, the band has really blown up with each release seeming to only get more and more praise than the last (at least where I end up reading reviews of their work). As someone who really has never enjoyed pop-punk music, I would have probably told you that any band that even attempted to fuse doom/sludge with that genre would be simply out of their minds, and yet, I'm still a fan of the band. The whole sludge fusion of sludge metal, and doom, with pop-punk is a fusion that I probably wouldn't have told you would have worked if I hadn't heard Torche before, but here we are, three full-lengths in and Torche have pretty much defined a new sub-genre of music. Granted, if you've heard the band's last couple of releases, than this album won't surprise you too much.
While I personally don't find this album as immediately catchy as Meanderthal was, I actually think that the riffs are better. There's still a pretty even mix between the more "metallic", or doomy I should say, songs which are a bit more riff driven and the more up-beat punky tunes that are faster and more melodically inclined. The likes of Kicking or Sky Trials are the types of songs that the band has become known for, those up-beat anthemic type of songs that are fast and driving but lend themselves towards being live favorites. Then you have the slower songs, which in the past have been more hit-and-miss for me, but on here are actually some of my favorites. Like I said above though, the band really hasn't changed their sound up too much from what they've done on the last couple of releases, but I'd like to think that they have refined some elements of their sound. Like I just said, I feel that some of the doomier tracks on here are actually some of my favorites on this album, so I see that as an improvement. I also think that a track like Solitary Traveler shows some growth as well. The band has always included at least one track that was sort of a "ballad" on their albums, and this is definitely the one for this album, but while it still very much sounds like Torche, it also kind of reminded me a little bit of Jesu. It's a lot more dirge-like while bringing an almost shoegazy type of backdrop to the song. I think it's the most ethereal I've ever heard the band. I also think that the instrumental title-track is also their strongest instrumental to date (not that there's a whole lot to compare it to in their discography, but still); it's dynamic and has a cool main riff.
Overall, I think it's another winner for the band. I certainly enjoy it more than Songs For Singles, but I don't think it tops Meanderthal for my favorite of theirs. It's solid, sludgy pop songs the way that only Torche can do them. If you're a fan of the band, this will not disappoint you.
Overall Score: 8
Highlights: Reverse Inverted, Snakes Are Charmed, Solitary Traveler
Posted by maskofgojira at 11:11 AM